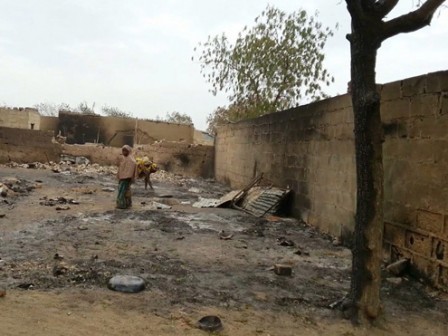 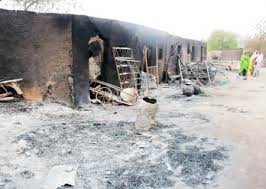 Explosion spree in Borno. Baga! The name sounds explosive. The village has exploded. Baga ghosts are subscribing to the graveyard. Graveyard is full, dead bodies piled high, waiting for new graveyard to be commissioned by His Excellency. There is tears in town, sorrow resides on the streets of Baga. Landscape is desolated, fumes of blood everywhere. Families vanished with the sound of guns. Everyone in Baga is a ghost. Those alive are living dead, waiting for the next explosion, expecting no help and getting no help. In Baga, help is dead! In Abuja and Lagos, life continues, business continues. No one bats an eyelid, no one is interested in another person’s life. Brotherhood is dead, sisterhood is dead.

Things cannot just go on as usual. If it is a question of aborted hopes, the country could live with that. In its short existence, the ill-led nation has had to cope with many betrayals and aborted hopes. Somehow, and like a stumped lover, it had always found the strength, the fierce energy to move on. Baga too will move on. But this time the omens of national regeneration are murky. While the FG is wasting “presidential pardon” on rogues who have stolen our blood in drums, something fundamental is also taking place. The spirit of the nation has decayed too. Having passed the point of morphine-assisted rebirth, Lugard’s contraption, christened by Flora in one of her many nights of emotional tete-a-tete with Lugard, is gradually expiring before our very eyes. We are in trouble.

Alas, succour has come the way of Baga, there is a statement from Abuja. Investigation must happen. Committees have been set up to pay up Baga’s tormentors. In this logic, while Baga dies, its tormentors will get additional life, furnished with unending cash flow, state appointments for juicy positions, life aesthetics and have presidential backing to live large. Baga’s tormentors will brag on the streets of Baga, sending sneers and jeers to the ghosts of the village. “We have arrived,” they will bark at the hapless living ghosts. They will build hills and live on mountains, dialing presidential phone numbers to call for political food like manna. They will blast siren on the streets of Baga, deafening the living dead and waking up the “dead” ghosts.

Consolation has come from the governor, he told the remains of Baga that it was God that came to destroy them, imploring the village to accept it as an act of God. It was God who became a demon and took over human flesh. It was God who built the Improvised Explosive Device that sent children to their premature grave. It was God who triggered hundreds of AK47 to destroy his own handiwork. It was God who led the gun dwell that consumed the whole of Baga because he was blood thirsty. It was God who wanted 185 souls has sacrifice, razed down 2000 houses and 62 vehicles. This is blaspheme! As a matter of godly gesture, the governor is donating N5m to revive the lost 185 souls. Let some people be prepared to be consumed by their own sheer ignorance.

A hitching history, a haunting tale, and hazy dreams, all conspired to define nothing and yet, they defined Baga. Nothing is life; Baga is now nothing, a conspiracy theory of pains. Pains, feelings of anomy, of gruesome fear, of tears cascading in bitter drops and of a grin smile full of sorrow. Now there is evil in Baga’s thought, evils of the mind and of feelings. Baga is mourning, Baga is rolling in tears, Baga is sobbing,  Baga is gnashing teeth, for everyone in Baga has witnessed to tears.

In addition to these woes, we have the alarming situation in which ordinary and normal protests or disagreements are condemned through the prism of religious and ethnic coloration.  We have a ruling class that has become a byword for a bizarre and berserk variant of kleptocracy. Unfortunately, the Nigerian post-colonial state has proved itself to be incapable of arbitrating or mediating anything, except when it comes to the deployment of gratuitous and autistic violence against different constituting units and nationalities. Like a childlike monstrosity, the Nigerian bandit leadership is frozen in conception as an instrument of Colonial Terror against captive nationals, like in the case of Baga, utterly incapable of coming up with an organic structure that will satisfy the yearnings and aspirations of its captured natives. Presiding over all this is a president who reminds one of a boy-emperor handed an empire as a toy rigged with explosives.

Baga will come out of this and move on. But Baga will not forget that it was once tormented and its tormentors were being begged to be rewarded. It will also not forget in a hurry that it once had heartless protectors. Like a friend said, we need to wait till 2015 to know if there are also no heartless voters in Baga. At the moment, Baga please take heart and move on.