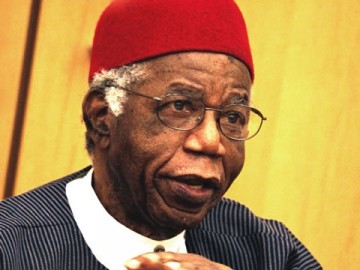 When the news of Prof. Chinua Achebe’s death broke on Friday morning, many people needed to confirm it. It wasn’t because they felt he was immortal, but because the thematic thrust of his latest and last literary gift to the world, his civil war memoir – There Was a Country: A personal history of Biafra –would only have been taken up by a warrior ready to deflate his arrows on the war front.

Achebe, 82, played a critical role in establishing post-colonial African literature. His seminal novel, Things Fall Apart, often cited as the most read book in modern African literature, has been read by students all over the world and translated into 50 languages worldwide.

His death on Thursday night is a big blow to the Ndigbo. The death of Dim Chukwuemeka Odumegwu Ojukwu in 2011 had left the Igbo with fewer voices that can rally them together. Although Achebe was not known to dabble in partisan politics, he was the voice for not only his people, but the African continent. Also, his death has depleted the rank of older generation Nigerian writers.

But then, the Iroko of African literature had been nursing ailing health for some time. He was involved in an accident that left him partially disabled in 1990.

In spite of that the Ogidi, Anambra State-born writer, had been in the news of recent.

The novel, There Was a Country: A personal history of Biafra, released into the literary market late last year, stirred the hornet’s nest.  Achebe, (born Albert Chinualumogu Achebe) and known as the Onwa Ndigbo, in his characteristic easy-to-understand style, had dug into the civil war era and come up with a literature that some claimed could cause disaffection in the polity.  In the war memoir, he accused among others, wartime Head of State, Gen. Yakubu Gowon, and the then Finance Minister, Chief Obafemi Awolowo, of carrying out genocide against the Igbo.

Of course, this drew the ire of a number of Nigerians. Many of them slammed the renowned author, chief among them, a former commissioner for works, Alhaji Femi Okunnu, who flayed Achebe for reopening old wounds.

He said, “I feel a bit disappointed at the statement credited to one of Nigeria’s leading literary lights and, indeed, one of Africa’s leading lights, Prof. Chinua Achebe. I am quite disappointed about the book alleged to have been written by him about a subject in which I played a leading role on the federal side.

“The allegation about Chief Obafemi Awolowo starving the Igbo-speaking Nigerians is totally false. Chief Awolowo was not actively involved in the peace talks.”

However, Achebe’s compatriot and brother in the literary world, the Nobel laureate, Prof. Wole Soyinka, backed Achebe. Soyinka, in an interview published in The Telegraph of London, said the Igbo were victims of genocide during the three-year civil war. He justified the secession bid and described Biafrans as a people who had been abused.

He said, “Of course I used my weapon, which was writing, to express my disapproval of the (Biafran) civil war into which we were about to enter. These were people who’d been abused, who’d undergone genocide, and who felt completely rejected by the rest of the community, and therefore decided to break away and form a nation of its own.”

Of course, this would not be the first time Achebe’s work would stir controversy. His first novel which made him popular worldwide, Things Fall Apart, was written to rebut the portrayal of Africa as a dark continent inhabited by cultureless people in Joseph Conrad’s novel, Heart of Darkness. In Things Fall Apart, which could be described as the great Nigerian novel, Achebe painted a true account of a traditional African society with its culture, traditions and laws. His other works, No Longer at Ease, Arrows of God and many others explored the African life. He was also the conscience of his society as can be gleaned from his works.

Apart from Achebe’s great literary achievement, he would be remembered as a man of character, who refused not one, but two national honours because he was not at peace with governance in Nigeria.

He had persistently reminded those in authorities that they had abdicated their duties and slammed them for instituting and sustaining corruption.

He protested the policies of former President Olusegun Obasanjo and incumbent President Goodluck Jonathan, by rejecting the two national honours they offered him in 2004 and 2011 respectively.

The Jonathan administration in 2011, offered him Nigeria’s third highest honour, The Commander of the Federal Republic.

In his rejection statement, Achebe noted, “The reasons for rejecting the offer when it was first made have not been addressed, let alone solved. It is inappropriate to offer it again to me. I must therefore regretfully decline the offer again.”

In 2004, Achebe had stated in a letter to President Obasanjo, “I write this letter with a very heavy heart. For some time now, I have watched events in Nigeria with alarm and dismay. I have watched particularly the chaos in my own state of Anambra where a small clique of renegades, openly boasting its connections in high places, seems determined to turn my homeland into a bankrupt and lawless fiefdom.  I am appalled by the brazenness of this clique and the silence, if not connivance, of the Presidency.

“I accepted all these honours fully aware that Nigeria was not perfect; but I had a strong belief that we would outgrow our shortcomings under leaders committed to uniting our diverse peoples.  Nigeria’s condition today under your watch is, however, too dangerous for silence. I must register my disappointment and protest by declining to accept the high honour awarded me in the 2004 Honours List.

“Twenty-seven years ago, I wrote a pamphlet called ‘Trouble in Nigeria’, which was about corruption. Today, matters are worse because they have been allowed to get worse.”

Achebe, however, had won the inaugural edition of the Nigerian National Merit Award in the mid-1980s. In 1982, he was awarded an honorary degree from the University of Kent. In 1992, he became the first living author to be represented in the Everyman’s Library collection published by Alfred A. Knopf.

He has been called “the father of modern African writing” and many books and essays have been written about his work in the past 50 years.

According to Wikipedia, Achebe was the recipient of over 30 honorary degrees from universities in England, Scotland, Canada, South Africa, Nigeria and the United States, including Dartmouth College, Harvard, and Brown University.

He has been awarded the Commonwealth Poetry Prize; an Honorary Fellowship of the American Academy of Arts and Letters (1982); a Foreign Honorary Member of the American Academy of Arts and Sciences (2002); the Nigerian National Order of Merit (Nigeria’s highest honour for academic work); and the Peace Prize of the German Book Trade. The Man Booker International Prize 2007 and the 2010 Dorothy and Lillian Gish Prize are two of the more recent accolades Achebe has received.

Prof. Robert Gibson once said that the Nigerian author “is now revered as Master by the younger generation of African writers and it is to him they regularly turn for counsel and inspiration.”

Many writers of succeeding generations regard his works as having paved the way for their efforts. Even outside of Africa, his impact resonates strongly in literary circles.

Novelist Margaret Atwood called him “a magical writer – one of the greatest of the twentieth century”.  Poet Maya Angelou lauded Things Fall Apart as a book wherein “all readers meet their brothers, sisters, parents and friends and themselves along Nigerian roads”.

Nelson Mandela, recalling his time as a political prisoner, once referred to Achebe as a writer “in whose company the prison walls fell down.”