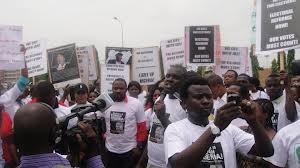 Since the announcement of the emergence of All Progressive Congress (APC) which is a fusion of ACN, CPC, ANPP and a faction of APGA, Nigerians have been exchanging ideas, information and punches as to what difference the party will or can bring to the polity. These are not unconnected to the fact that politically conscious Nigerians hold varied opinions regarding the redemption of Nigeria. For the purpose of clarity, I have segregated these Nigerians based on their opinions into three groups.

The first are those who have woefully failed in managing the affairs of this great nation. They are those who do not care about the security and welfare of the common man and that is why for 14 good years, they have not been able to fix the problems in just one sector of the economy. These set of people are those who do not want opposition because they want to rule and loot the nation for 60 years. They are members of the ruling Peoples’ Democratic Party or their sympathizers who in one way or the other benefit from the party. For these people, APC will never work and even if it has the chance of working as it seems, they will do anything to scuttle it.

In the second group are those who believe that what Nigeria needs at the moment is an opposition party that will oust the PDP. To this people, APC is the best thing that has happened to Nigeria in recent times as they strongly believe that the problem of Nigeria will be far reduced if PDP can be defeated in 2015.

The last of the three groups are those who are neither satisfied with the performance of the PDP nor see the emergence of APC as the solution that Nigeria needs. To these people, the solution to the myriads of Nigeria’s problems lies in the hands of the youths. What this means is that old politicians should be completely alienated from the scheme of things as far as reclaiming Nigeria is concerned because they are either part of the problem or have at one time or the other being members of the PDP and their supporters who couldn’t solve, but compound our problems. They want the youths to form a party that will be solely comprised of youths who in turn will contest and fill up public and political offices. Anything short of this to these Nigerians is like putting old wine in a new bottle.

While this may be true and ideal to some extent, the question that should be asked is does it conform to the realities on ground? Is it something that is achievable in 2015? Agreed that the larger percentage of Nigeria’s population constitute of the youths, but is population alone the only machinery needed to win elections and take over governance? Yes, politics is a game of numbers, but while it is even debatable that a government run solely by youths is not a guarantee that the Nigeria of our dreams will be achieved, especially considering that youths who have had the opportunity to serve in various capacities in the country have done more harm than the old breed politicians, those who are advocating for a wholly youth lead political party all geared towards 2015 need to understand that numbers only become relevant when the things that need to be done as a build up to casting of ballot has been put in place.

Politics in Nigeria is not the same as what obtains in other climes. For you to be registered as a political party in Nigeria, there must be structures like the presence of the party in all states of the federation, when you succeed in doing this, you must obtain forms with huge amounts of money from INEC to contest for political offices depending on the position you are contesting; you will campaign, mobilize and even acquire supporters. All these require huge sums of money. How much of this money do the youths have? How much of these financial requirements can the youths raise between now and 2015 to be considered a serious contender for elective offices. I remember telling some people during a discussion that if political parties like the ACN, CPC and ANPP who have built structures over the years and have the financial war chest to prosecute elections are coming together to form alliance, why do we think that the youths who are not structurally on ground can perform better in 2015? The money we see that is flowing with carelessness among political players are not mere contributions of a few thousands by the stock of politicians we have today. As much as I know that a large percentage of this money is stolen from our coffers, they are real money and they play important role in the extent that political parties go.

The place of the youths in the democratic process remains cardinal for the growth of the nation especially in a country like Nigeria where over 60 percent of the population constitutes of youths, but as much as I canvass for the active participation of youths, it will be wrong to think that the youths should solely run the country. Youths championed the revolutions in Tunisia and Egypt, but who are the leaders of the two countries today, Youths?  Part of the reason why Nigeria seems to be what it is today is because the old folks politically alienated and socially excluded the youths from democratically participating in governance. We will only be repeating the same mistake if we do the exact opposite. The truth is simply that the two must work together. New breed without old breed, breeds greed as we have seen and that is why as the new breed prepares to take over, we must also involve the old breeds so as to avoid breeding greed.

What I think the youths should be preoccupied with at this point in time is how to make positive impact on who becomes the next president, governors, senators etc in the forth coming elections, while formulating long term strategies for opening up the space for youths to actively participate in political venture. The youths can set a target date where certain percentage of the governorship, senatorial, house of assembly seats etc will be reserved for the youths within a political party that we choose to align ourselves with. To achieve this however, we must prove that we are a force to be reckoned with, because nobody will give you anything on a platter of gold. Aside political positions, we must harness our numbers to be able to influence the decision making processes of any institution, political party or government we find ourselves. In a truly democratic setting, young people form their opinions and exercise choices as equal members of a community; this we can only achieve if we belong to that community as a bloc.

Rather than deceive ourselves that youths will take over the governance of Nigeria in 2015 which is just 2 years away, what we should be doing now with post 2015 as the target is to continue to mobilize an army of youths so as to have a structure with which we can participate actively in the process of governance. This mobilization must involve enlightenment and education so as to bring all youths up to speed as the overall goal and benefits accruable when we play active roles.

The process of transfer of leadership is gradual and systematic. If we are able to achieve the above, we will gradually take over the governance of the country and incidences where those who have been in government long before many of us where born remaining in government will be eliminated.

Abubakar Sidiq Usman is a Urban Planning Consultant; Blogger and an Active Citizen working towards a better Nigeria. He blogs on Abusidiqu.com and is available for engagement on twitter @Abusidiqu