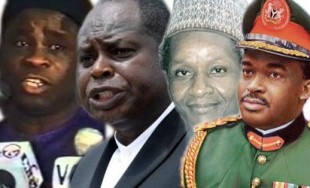 If someone had told me I would be writing this piece just a month after I decided to cut President Jonathan some slack, I would have waved if off as a big joke.  My focus in recent times has been on analyzing state budgets, most recently that of Ogun State, which is at best a comedy of some sort. My conclusion on Governor Ibikunle Amosun for now is that he might end up being an even worse governor than his predecessor, the legendary and alleged master thief Mr. Gbenga Daniel.  But lest I stroll off the point, let us return to President Jonathan’s administration.  In the past few months I have come to pity this ‘Doctor’ from Otuoke.

At the risk of been labeled a PDP apologist, I disagreed with twitivist and other opinion writers, asking them to cut our president some slack. The art of criticism had hit an all time low; we had people who simply joined the bandwagon, because criticizing the government was the in-thing in town. We had people practically calling President Jonathan names like fool, idiot, crazy, crook, stupid, clueless, dull, illiterate and worst of all corrupt.

“He has shown himself worthy of these names” they said, with his actions and inactions ranging from the unconstitutional sack of Justice Salami, who was likely going to give judgment against his election, to the fuel subsidy brouhaha and the bribery scandal that rocked the panel charged with investigating rot in the petroleum sector as instigated by his friend and personal confidant – Femi Otedola.

I decided to cut President Jonathan some slack because I erroneously believed he wasn’t prepared for the leadership position he plunged himself into. Reason being, he had always been satisfied with second position or assistant leader right from secondary school to the presidency, he was always in a position of assisting until something unfortunate happened to the leader.

Having witnessed his actions this past week alone, it is now clear that President Jonathan was prepared for the presidency, he was prepared to murder sleep and sleep he has murdered.

How could he possibly explain the granting of a presidential pardon to his mentor, godfather and political benefactor, the disgraced thief and fugitive Mr. Alamieyeseigha (who jumped bail in December 2005 and bolted to Nigeria from the U.K. after he allegedly disguised as a woman to deceive the U.K. border officials)? If you still don’t realize how immoral this act is, let me give you a snip view into the atrocity committed by Mr. President’s mentor.

Bayelsa state, created on October 1, 1996, is a very small state with eight (8) local governments and a population of 1.99m people.  It is endowed with natural resources and adjudged the richest state in Nigeria. Bayelsa State has one of the nation’s largest crude oil and gas deposits which makes it earn a lot from the Federal government, but as rich as the state is, its citizens wallow in poverty. There is no fully functional health facility in the state (remember that President Jonathan’s brother had to be flown to the State House Clinic in Abuja for treatment before he passed on), transportation is a joke and education is virtually non-existent save for the federal government established Niger Delta University.

Bayelsa has no trade or commerce worthy of note as the little subsistent farms have been destroyed by oil spillage and the fishes rendered inedible by polluted waters, thus making the Bayelsa State Government the highest employer of Labour in the state.

It may interest you to know that only one major road runs through the entire state, yet Mr. President’s guide and tutor looted the state dry. In my opinion, my president hates his state of origin. I see no other reason why he would grant a presidential pardon to that lunatic (yes, it takes a lunatic to loot at that alarming rate knowing the amount of poverty and suffering his people are entangled in).

The U.K. authorities seized $1.5 million (N225 million) cash in Mr. Alamieyeseigha’s London home as well as $2.7 million (N405 million) held in bank accounts at Royal Bank of Scotland PLC and Santolina Investment Corporation. His London real estate valued at $15 million (N2.25 billion) was also seized by U.K. authorities. He had £203,753.34 in his Barclays Bank Plc accounts while his Bank of America had $1, 600,000.00 account balance as at January 2005. £1.9 million in a Royal Bank of Scotland account belonging to his company Santolina which he had requested to be transferred to an account in Cyprus was also seized.

Other properties acquired with Bayelsa State funds in London include one at 247 Water Gardens, W2 2DG which he acquired for £1.75 million, another at 14 Mapesbury Road, NW2 4JB which cost £1.4 million and yet another at Flat 202, Jubilee Heights, Shoot uphill, NW2 3LJQ with an approximate cost of £3 million.  Properties in South Africa acquired with Bayelsa State funds include but are not limited to V & A Waterfront, Cape Town, which is worth over £1 millon.

You have to understand that the stolen assets listed above are just a fraction of the total amount stolen by one of Nigeria’s greatest thieves –Ex-governor DSP Alameyeisigha.

Contrary to what twitivist, politicians and ferocious writers conjure about the President, Dr. Jonathan is not clueless. In fact he has got lots of clues, vicious clues. Though one cannot trace an intelligent intervention, programme or policy he has thought of himself in critical sectors of our economy, he has come up with brilliant ideas for taking Nigeria backwards. President Jonathan was prepared for the presidency, so prepared that he doesn’t have to think twice before unleashing his unpardonable ideas on Nigerians.

This latest of his gaffes is worth condemning by every reasonable person on earth. Several CSOs, politicians, professionals, and international agencies like Transparency International (TI), among others, have condemned it. The only reasonable course of action left for President Jonathan is to reverse the pardon with immediate effect like he back tracked on the renaming of Unilag and the removal of the fuel subsidy.

It is clear to all that Nigeria’s President Jonathan is not fighting corruption. His wife clowns around with millions of Naira in cash, dolling it out to every Tomi, Dada and Akande. His friends and close confidants are convicted felons, criminals, ex-militants and folks who allegedly enriched themselves corruptly. Examples abound in Bode George, who he nominated as an executive in his party, also appointing his wife – Roli George – the chairman of the board of National Population Commission (NPC). Anthony Anenih, Asari Dokubo, Government Tompolo, Doyin Okupe, Alameyeisigha, Femi Otedola and several others are those the president who is supposed to be fighting corruption dines and rolls with.

Mr. Jonathan knows all that he is doing, he knows his chances of returning to power in 2015 are one in a hundred, and so he his perpetuating all these immoral acts he had carefully planned out before ascending the ‘throne’.

It is my hope that president Jonathan will reason with majority of Nigerians and the international community to reverse this latest gaffe, carefully serve his ‘mandate’ and vacate the seat by 2015. Enough of this international embarrassment called government in Nigeria.

In conclusion, here is a piece of advice for Mr. President if he is looking for people to pardon. He should go to the prisons, ask for Bayelsan residents who were convicted for stealing less than N10,000 due to hunger and unemployment during the tenure Mr. Alameyeisigha and pardon them. It is then and only then posterity can give him the benefit of doubt.

And if you still have hope in the presidency of Dr. Goodluck Azikwe Ebele Jonathan, you are of all men most miserable.

Kikiowo Ileowo is a public commentator and the Editor of The Paradigm, an online news medium.
I am @ileowo4ever on twitter.