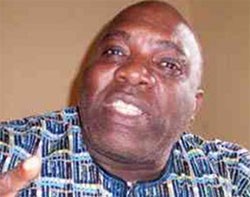 The Federal Government Tuesday dismissed the recent visit of governors coalescing under the All Progressives Congress (APC) to Maiduguri, describing it as opportunistic and reckless, designed to score cheap political points.

Also reacting to the statement by the Action Congress of Nigeria (ACN) Monday, which claimed that the assassination of the Kwara State Commissioner of Police, Mr. Chinwike Asadu, in Enugu was indicative of a failed state, the government cautioned ACN and other opposition parties against the politicisation of crimes and criminal activities in the country.

Senior Special Assistant to the President on Public Affairs, Dr. Doyin Okupe, who spoke to journalists in Abuja said: “The APC governors’ visit was hurriedly packaged to pre-empt the visit of Mr. President which had been planned and scheduled several weeks ago.

“This is surely an act of crass opportunism and political desperation on the part of these governors and the party they represent.” According to Okupe, “We regard that visit as a media circus, stunt and photo-op by these governors who were apparently in Maiduguri to feather their political nests.

“If one may ask, where were these governors in the last 18 months that they had been in office? It is obvious that it is part of their mobilisation drive that took them to Borno State, rather than any patriotic call to duty. “These are desperate power mongers who flock together in spite of their obvious conflicting political philosophies and inordinate ambitions.”
Okupe called on ACN to explain to Nigerians the benefits that the celebrated visit had brought to the citizens of Borno State and what effect it had on the activities of the Boko Haram sect, which even carried out bomb attacks while the APC meeting was in progress.

“That visit was borne out of sheer political recklessness and could have caused Nigeria major security embarrassment but for the fact that the Federal Government and its security apparatus took extra efforts to ensure that the visiting governors were safe.

“Being elected officials, the onus was on the Federal Government to ensure that they were safe in spite of their being oblivious of the peculiar security implications and real potential dangers inherent in their hurriedly packaged visit,” Okupe said.

Okupe further described the APC as a rickety political organisation seeking cheap publicity, saying, “The visit had nothing to do with sympathy, as it was borne out of political recklessness and political grandstanding.

“The Federal Government does not play to the gallery, it is doing what ought to be done.”