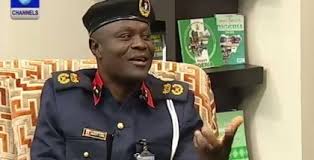 When one certain Mr Shem Obafaiye goofed on a Channels Television breakfast programme – Sunrise Daily – by confidently expressing ignorance of the web address of the organization he represents, the Nigeria Security Civil Defence Corps (NSCDC) of which he is a commandant there and made reference to ‘my oga at the top,’ a phrase which has now become an instant hit, nobody in their wildest imagination could have believed such an innocuous mistake will bring smiles to the face of many. But it did.

I had a jolly good laugh. I shared a YouTube link to the video on my girlfriend’s wall on Facebook and as intended, she quickly caught the ‘oga at the top’ bug. But that was how far I went. How far did you go? And no, this is not a judgement call but how many of us have not made an honest mistake before?

I feared for Mr Shem Obafaiye on two grounds – his psyche and his job. In other climes, assuming he is a ‘white man’ no pun intended, he would have committed suicide! There’s no two ways about it. His job already is on shaky grounds if media speculation is to be believed – that he has been suspended by his ‘oga at the top’.

Wow! Not like I am surprised but such is the power of social media – a virtual yet very powerfully effective tool if and when deployed. Little wonder the oppressors of the Nigerian people are jittery and whenever they have the opportunity never cease to call for its censorship. While I support responsible and conscious use of social media tools, I do not support its outright censorship! I digress.

While the ‘oga at the top’ joke was going round, I could not help but notice two salient points: that while Mr Shem Obafaiye was the butt of all the jokes, no one cared to know his ethnicity or religion. And when calls were made to desist from doing further damage, no one used either religion or ethnicity as an excuse. For once in a very long time, these two key ingredients which have always been our focal points in an argument or counter argument, was conspicuously missing. How did we achieve that feat?

Which brings me to a somewhat inconclusive end – it is either we are smart by half or simply foolish! Where we need to discuss the real issues devoid of religious and ethnic sentiments, that is where we display our ignorance and where it is not really required, we play intelligent. Who are we deceiving? Those who were so quick to print the ‘oga at the top’ t-shirts, make video and audio remixes of the phrase and so on thereby cashing in on the unfortunate mistakes of one man, I ask, where was your thinking cap when the National Council of States headed by President Goodluck Jonathan granted DSP Alamieyeseigha a fraudulent state pardon?

This saga once again reveals the thinking of the average Nigerian man – kill the fly with a sledge hammer but decorate the path of the poisonous snake with sweet scented flowers. It is that same attitude in us that will make a mob kill four young men in their prime over a false allegation but praise the likes of Peter Odili to high heavens for being a smart thief. It is that same spirit that will not let us constructively dissect issues of national importance from a nationalist and unbiased point of view but will allow us do same when matters of less national importance are brought up. Are we alright? If left unabated, this ‘oga at the top’ joke will last longer in national discourse than the pardon granted Alams and the everyday brazen pilfering of our commonwealth by our ogas at the top who are by the way having a field day while we concentrate all our energy on the mundane.

The same passion, zeal, forthrightness and thoughtfulness with which we attacked the ‘oga at the top’ phenomenon, can we at least translate same into our everyday lives?

The moment we realise that every mobile phone, personal computer, tablet, or device that grants us access to the internet is a very powerful tool that we can use in causing a change, positive change, that is the moment we begin to reclaim our country back from those who have made it their birth right by virtue of luck, appointment or by our own ignorance.

The moment we realise that there are bigger fishes to fry than gathering around the fingerlings just to satisfy our transient pleasures and fantasies that is the moment we begin to indicate our seriousness to challenge the status quo and keep our ogas at the top on their toes.

Now, may I seize this opportunity to join those who have called for an end to this rude joke? Enough said, because if I may recall correctly, no one, maybe with the exception of President Jonathan though, has been at the receiving end of Nigerians use of social media like Mr Shem Obafaiye. The poor man has suffered enough and deserves our collective pardon.

After all, DSP Alams, a convicted felon who still has cases pending in the UK and maybe U.S., was recently granted pardon by the state – what more could be worse? Who else could be less deserving of our forgiveness and mercy?