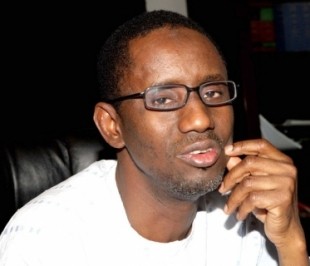 Fact: Nuhu Ribadu is a frustrated man. He is hardly a happy man, at least outside his small cycle of family and friends. The once fiery anti-corruption czar got frustrated and disappointed on many counts. He was unceremoniously axed from the helms of the Economic and Financial Crimes Commission (EFCC), in 2008, a few months after the ascension of late President Umaru Yar’Adua. His then rank of Assistant Inspector General of Police (AIG) was brought to question and eventually trimmed to a Deputy Commissioner of Police (DCP) – two steps down the ladder. And, in clear manifestation of his oft-stated fears over his job the man narrowly escaped the assassin’s bullets on two occasions before he managed to escape the borders of the country. He became disenfranchised, exiled and, ultimately, ostracized. But it didn’t come to him as a surprise because he had for long realized that fighting the high and mighty is not without a price on one’s side. “Corruption fights back and it fights dirty!” he often says. No other Nigerian, nay African, is more competent to report on how embedded official corruption and fraud are in the fabric of the society, and how corruption also haunts anyone that attempts to cleanse it.

Like in a well scripted fantasy novel, President Goodluck Jonathan last week convoked the National Council of States (NCS) meeting to grant state pardon to convicted corrupt former Bayelsa state governor, Diepreye Alamieyesiegha and former managing director of the defunct Bank of the North, Shettima Mohammed Bulama. Nothing is as lethal to Nigeria’s skulking fight against the menace of corruption as this is ever recorded, apart from the move to scrap off the EFCC itself that was hatched by some politicians around 2008.

Listening to Ribadu commenting on the controversial pardon over the BBC Hausa at the weekend, one hears a voice of a frustrated man. There was discernible anger from the way he responded to the questions about the whole show of shame that is the state pardon jamboree. The tone of the voice alone was enough to tell a story: a story of series of disappointments of a man who, like a messiah trying hard to cure his society of odious stench of evils got spikes sprinkled along his path by the same people who should clear thorns and pebbles off the road to a better future.

The former anti-graft czar has valid reasons to be angry. As he stated, he and his team at the EFCC had undergone great difficulties in meticulously investigating these two individuals and, eventually, bringing them to book. It was, for Ribadu, something of joy and celebration when Bulama, and, later, Alamieyesiegha was convicted. Joy not for celebrating another’s ‘misfortune’ but for the fact that the once powerful treasury looters who, over the years, collectively siphoned over $380 billion since independence and stashed them abroad, could now be brought to books to account for their fraudulent past.

Ribadu’s effort to bring those two figures, and subsequent other corrupt public servants to justice, was something that should be rewarded with the highest honour the country could give an individual. Through the ideas and selfless works of one individual, the global image of Nigeria was greatly embellished, leading to the deletion of Nigeria’s name from FATF’s “List of Non-cooperative Countries and Territories” as well as appreciable debt relief from the Paris Club. To his eternal credit, Ribadu worked with a great deal of self-restrain. Thus, he avoided several financial inducements that came his way, like plague. A story was told of how a notorious internet scammer who duped some Brazilians to the tune of $150 million, fervently begged Ribadu to halve the money and let him go with one portion while he (Ribadu) takes the other half. The then EFCC chairman refused and he went ahead to prosecute the man and returned the forfeited money to the people duped. This was neither the first, nor the last in the series of barely known incidences of Ribadu choosing the less traded path to sincerity and honesty, as against personal interest. Well before his days in the EFCC, Ribadu had once rejected bribe to the tune of N20 million while prosecuting a case of fraud involving some Central Bank of Nigeria and Ministry of Finance officials in the mid-1990s. Indeed, the case of the $15 million Ibori bribe saga, which Ribadu declined, has become a reference point worldwide, for sheer magnitude of the bribe money and highest sense of responsibility exhibited by the target of the bribe.

However, to the chagrin of anti-corruption campaigners and the global community, the first ‘reward’ Ribadu got from his years of untainted work at the EFCC was a tactical though brazen butt out. Yet, those who engineered his removal from the EFCC were not done yet. They kept masterminding heinous plots to distort the course of his entire life, the height of which was a ploy to send him off the face of the earth.

But still resolute on seeing that Nigeria is cured of its number one malady – corruption, Ribadu accepted to chair the Petroleum Revenue Task Force, last year. He worked against the odds, including starvation of funds, to bring about a report that unearthed unimaginable level of corruption perpetrated in active connivance with those who should have checked such rip off of the country. However, instead of government taking the committee’s revelations seriously, we saw how an obviously government-backed tragic-comedy was staged to rubbish the report from the day of its presentation. Yet, President Goodluck Jonathan still promised to act on the report. However, six months since the report was turned in, mum is the word from the side of the government.

The same government that showed this lackadaisical gait in dealing with this clear case of disservice for the nation is now reversing the good works Ribadu did many tears back.

Typical of the saying that prophets are not valued at home, Ribadu’s honours and accolades often come from the outside. A few months after he escaped the twin assassination attempts, Ribadu secured Senior Fellowship position at St. Anthony’s College, Oxford University, UK and another offer came from the prestigious Centre for Global Development where he served as a Visiting Fellow. The height of it all was the World Bank’s Jit Gill Memorial Award for Outstanding Public Service, the first from Nigeria to fetch such a reputable award.

Indeed, the Alamieyesiegha pardon-gate has once again brought to the fore the insincerity of the Jonathan Administration to fighting the scourge of corruption and fraud in this country. Already, the torrent of criticism from within and outside the country, including – significantly – from the US government, has shown how unpopular this decision is. It amounted to dragging the image of the country to the pre-EFCC days of money laundering, advance fee fraud and impunity. The sooner President Jonathan decides to eat the humble pie, the better for the country.