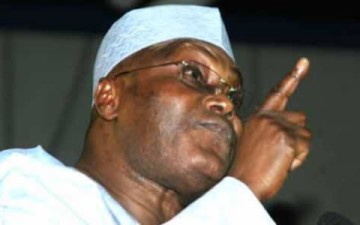 Former Vice-President Atiku Abubakar on Wednesday said the formation of the All Progressives Congress would help to strengthen democracy in the country.

Atiku spoke on Wednesday while delivering a lecture entitled, ‘Thoughts on internal democracy in Nigerian political parties: challenges and strategies’, at the Department of Political Science, University of Ibadan.

The former VP, who described two-party system as a veritable platform for nurturing democracy, said,  “I am pleased that progress is being made in that regard with the recent emergence of the All Progressive Congress.

“Two-party system is the only guarantee of a viable alternative to the ruling party. Two party political structure is critical for keeping the ruling party from taking the electorate for granted.”

The Turaki of Adamawa also described genuine electoral reform as a means of guaranteeing true internal democracy in political parties.

“The reforms will not only seek to bring about direct changes in the way the parties conduct their affairs but change the electoral system in a manner that will promote internal democracy,” he said.

Attributing the problem in the Peoples Democratic Party to lack of internal democracy, he said only true democratic value could aid the nation’s growth and development.

He stressed the need for political parties to protect the interest of the minority.

Atiku said, “Political parties in Nigeria will continue to deteriorate in terms of internal democracy. Political parties are characterised with the rise of the dictators, the executive power-wielders and the godfathers.”

He stressed that the adoption of consensus candidate, imposition of candidate, structure, ownership and funding of parties by godfathers were the bane of internal democracy.

He also called for the adoption of electoral reforms, where the appointment of Chairman of INEC and commissioners would not be under the control of the President.

“The President and governors should be prevented from using state resources to carry out electioneering,” Atiku added.