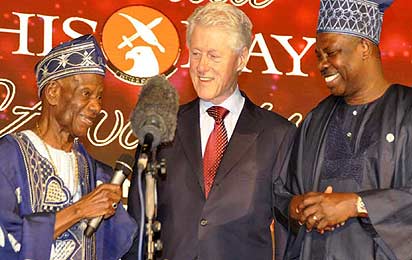 Travel notes and recorded insights of visitors to other countries constitute important aspects of the world’s intellectual heritage. Two quick examples are the classic reflection on America by the French lawyer and philosopher John Montesquieu and the 20th Century dispatches of John Hobson, an English journalist from South Africa; which eventually morphed into a much commented on theory of imperialism.

The discerning ought to pay attention, therefore, to the reflections of visitors to our countries all the more so when the august personage is a former President of the United States, Mr. Bill Clinton.  Speaking in Abeokuta last week at the 18th edition of ThisDay awards, the statesman credited with a turnaround of the American economy under social democratic auspices in the 1990s, came up with three postulations which should be of interest to our leaders who are feverishly strategising on how to win the 2015 elections.

There is, first, the dramatic waste of resources, much of it through soar away corruption and unbridled theft of the public kitty. Clinton, of course, did not put it that way, by reason of diplomatic etiquette; but he said enough for us to read between his lines. He did say that we have not done a good job of managing our natural resources, maintaining that “you should have reinvested it in different ways.”  This brings an international perspective on the raging debate within the country on the absurdly high cost of governance under Nigeria’s corrupt, distributive federalism. Interestingly, the Jonathan administration rolls out the drums on having reduced the share of recurrent expenditure from 74 per cent in 2011 to 71 per cent last year and projects a further reduction to 68 per cent in 2013.  Even if this modest goal is realised, and it is a tall order given the current election-related upswing in spending, it is still a far cry from realising the kind of investible surplus that can jumpstart sustainable development. Also budgetary allocation to prestige and non-revenue earning projects like mouth-watering sums for the vice-president’s official quarters and elongating the presidential fleet do not square with the advertised goal of bringing down the tide of consumption and personal emolument.

So far, various proposals and strategies for bringing down the cost of governance, some of them made by government-funded commissions have continued to gather dust in abandoned files to which they are consigned. At the political level, administration strategists are celebrating  such recent deft manoeuvres as the breakup of the Nigerian Governors’ Forum, the rebound of Mr. “Mr. Fix it”, Tony Anenih, as chairman of the PDP Board of Trustees as well as the legal clearance given to President Goodluck Jonathan to contest the 2015 elections by the Abuja High Court. Clinton’s subtle reference to squandermania and corruption as drivers of Nigeria’s prolonged, arrested development put a different gloss, altogether on these political triumphs.

Providing material for national reflection and stock-taking is Clinton’s second point about the pervasive poverty and worsening inequality that have attended Nigeria’s severely distorted version of neo-liberalism.  The difference must be striking between the splendour of the hall where Clinton spoke in Abeokuta and the rustic mien of the surrounding neighbourhood where many Nigerians barely make ends meet. In the same connection, The New York Times reported in an Op-ed article on March 1, that there exists a planet of difference between the recently razed down shanties of Badia-East in Lagos State and the “upmarket, Dubai-style shopping and housing development” projected in the Eko Atlantic City. And so, the Nigerian political elite, government and opposition alike are united in a growth agenda which has no place for the poor let alone the poorest segments of society.

In a revealing tribute paid to Dr. Ngozi Okonjo–Iweala, the Finance Minister, by the former presidential candidate of the Action Congress of Nigeria, Mr. Nuhu Ribadu, we catch a glimpse of the developmental ethos that unites both public figures.  Enthused Ribadu, “In her World Bank office, a beautiful portrait of the Sardauna of Sokoto, the late Sir Ahmadu Bello, occupied a central space on the wall. I once asked her the reason for exhibiting that picture. She said she admires his leadership and achievements, particularly the positive change he brought to the North of Nigeria.”  In other words, Nigeria’s economy is managed by a conservative reformer in the mould of Ahmadu Bello. To be sure, Sir Ahmadu Bello did a lot for the North, but his was an aristocratic vision of development in which hierarchy and royalty came well ahead of social equality or income redistribution.

Today our politicians are busy talking about labels – PDP versus APC – but they remain ominously silent on substantive policy direction and on how the common man figures in the never-ending shenanigans. Why does worsening inequality count?  The chickens are coming home to roost and the wails of the underclass mean that the rich can no longer take peaceful rest in the fabulous comfort of their fortified homes.  In Clinton’s words, “As you keep trying to divide the power, you have to figure out a way to have a strategy that will help in sharing prosperity.”

This is a much different approach from merely celebrating growth in gross domestic product while failing to take cognisance of rising unemployment, especially among the youths and the downward slide in the productive sectors of the economy. Purposive redistributive politics anchored on prudent management of resources is what Clinton recommends to a nation adrift; and what better time to make the point than now when politicians are preparing themselves so ostentatiously for mandate renewal.

Worthy of rumination is Clinton’s third point about the manifest waste of human resources constituted by the substantial number of highly educated and well-trained Nigerians, many of who are making waves in the US and other countries of the world. Clinton believes that Nigeria should harness this powerhouse of intellect for national development. The irony of the current situation whereby our government pays through its nose to hire foreign nationals to undertake jobs which our own nationals could have better done is of course a most gripping one.  However, at a time when travel advisories on Nigeria are being issued by several nations around the globe warning their countrymen to stay off the country, it is doubtful if Nigeria can successfully launch a bid to recover its manpower lost to immigration. For this to happen, there must be evidence of improvement in the conditions of professionals at home as well as in the environment in which Nigerians as a people make a living outside of the special advantages of those who have political appointments.

The point must be underlined, however, that as the example of the Asian Tigers demonstrate, the primacy of the intellect and of knowledge workers must be asserted before laggard nations can be made whole and find a place on the world map. Too often, sound advice given by Nigerians who are not in government are treated with disdain or dismissed as partisan. Hearing these words from the lips of an eminent visitor like Bill Clinton should hopefully make a difference to what has frustratingly become a dialogue of the deaf. And that is if they have not heard such before from another equally eminent foreigner.