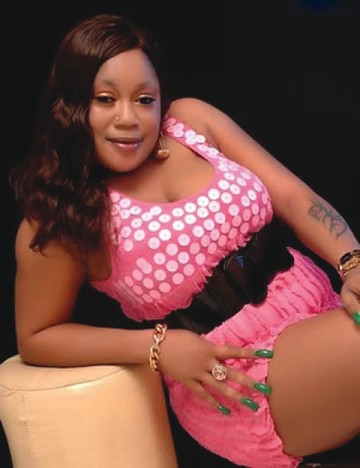 Popular actress, Tayo Odueke aka Sikiratu Sindodo, tells Ademola Olonilua how she handles the poor perception people have about her

People thought I was a promiscuous girl after I acted in the movie. I am a totally different person from the character I played in that movie. When people get to meet me, they get to know the kind of person I am. I am not promiscuous; Tayo Odueke is different from Sikiratu Sindodo. I’m not Sikiratu Sindodo. It was not something I did. It was just the movie that brought me to limelight. It was the name of the character I played in the movie. Apparently, when people watch it, they get connected with the character, so when they see me on the road, they call me Sikiratu Sindodo. Sometimes people forget my name. It is not me; it is just about the movie because the movie went places.

How I got into acting

It was a long time ago; in 1999, I did not really know I was going to get into acting. My father wanted me to study mass communication while my mother wanted me to go for law. When I left secondary school, I was waiting for my JAMB and SSCE results. A friend of mine came to the house and said there was an audition and it was Charles Novia that was doing the production. I went there and acted alongside Segun Arinze and the late J.T Tom West. I acted as a bodyguard in that movie. From there, I met some producers of English films. It was actually Segun Arinze that introduced me to a lady in the Yoruba industry that made me feature in Yoruba movies.

My parents’reaction to my chosen profession

My parents did not like it but I was adamant because when I started acting, I fell in love with it. I don’t think I can do anything else apart from acting. If I were not acting, I probably would be a newscaster. My parents tried to stop me but at the end, they just had to leave me alone. I told my mother that I was going to leave the house if they did not let me do what I wanted. I did a diploma course in Theatre Arts at the University of Ibadan. After that, I went for Creative Arts in the University of Lagos. That was when I started acting fully. They left me because they had no choice; it was something I wanted to do. My mother was strict. My father really loves me; I am a daddy’s girl. He did not like it, he was angry with me. He did not talk to me for so long because I was not living with him. I would call him and he would hang up the phone on me. He would tell me to quit. My mother was also very angry and she beat me. After a while, they left me; now my father is very proud of me. Anytime they talk about me, he says, ‘that is my daughter’.

Why I delved into movie production

Actresses don’t make money. In the Nigerian movie industry, we do not earn much. When I got to know that if I produce movies I would make more money, play more lead roles, I would write more of what I want to portray to people, I would be able to explain so many stories that I have with me, that was what made me go into movie production. When I produce, I do not like to play the lead role because of the stress. It is much different from acting. You sell your movies and make more money. You can do so many things with your movie.

Why actors don’t make much money

For example, in the Yoruba movie industry, we work like a family. Fathia Balogun is my sister, we are close, we want to work, and we work like a family. Although we have changed now for about two years, we have learnt to negotiate with ourselves because we have to move forward. We cannot keep working like a family all the time. We have to grow; we have so many bills to pay. The government is not helping us; we have to use our money to produce. When we produce our movies with our money, they are pirated. Assuming I produce a movie, I sell it to a marketer, he then sells it out. If I produce a movie today, by the next day, it would have been pirated. If about 12 movies come out every two weeks, the 12 movies would be pirated and they would be in one compact disc. That alone is killing us. How am I supposed to sell my movies and I dub over 50,000 copies? Nigerians like freebies; if they see 12 movies on a compact disc, they go for it.

It is true. We work like a family, they don’t. You call me for a production, we negotiate. I tell you the amount I want and you pay, if you really want me to feature in your movie. Marketers foot the bill. Most of them do not produce their movies. Maybe lately, a few of them – like Ini Edo, Uche Jombo and a few others – have started producing their movies. As for us, we go out of our way, we use our money, costumes, we do so many things on our own but they don’t.

The best relationship I have ever had

I am in a relationship now and it has been the best so far. The guy I’m dating right now is cool. He is very nice. I love him very much. When I was ill, he stood by me. Anybody that knows about me, knows him. He has brought me much more closer to God. I am close to God but he has drawn me closer to God. He is just fantastic.

About getting a tattoo for him

No, I did not. I just have a crown on my back. I have the picture of a crown and I inscribed ‘amazing grace’ beneath the crown. I don’t have anybody’s name on my back. I did not do a tattoo for my boyfriend. I did it for myself.

The rumour about me and Tolad, the marketer based in the US, is not true. He is like my uncle. I travelled with my boyfriend when I went to the United States. My uncle is a promoter so when I launched a film, he was around to help. Why would I date my uncle? He is married and he has grown up kids like me. As for Aremu Afolayan, he played the lead character in my movie. He is somebody I can call and tell if something is bothering me. Even when he calls me, he could say, ‘my mummy’. I dated Musiliu Oluomo. He is my ex-boyfriend. So many people have dated him as well, so, I don’t know why they tend to tag him on me. I don’t know why it is like that.

My father and my mother broke up. I am from a polygamous family. My mother was once married. Growing up was fun for me. My father used to come and see me every Friday. I went to Mainland Preparatory Nursery and Primary School. He would come every Friday and take me to Leventis, then in Surulere. He would buy me chocolate, ice cream, juice and other things, then take me home. I just have this soft spot for my father.

Me as a wife material

I know I will make a good wife. I cook well; I am not the outgoing type. If I am not working, I am at home. It is sad that when people see me outside, they have a different impression about me. I don’t know why, maybe it is because I am an actress. I am not like that, I pray five times a day. If I open the trunk of my car for you, my praying mat is there. I may not do that when I work all day but in the night I do so. People do not believe that I am close to God. When I into acting, it is different. I wear different kinds of clothes just to fit into the character I am playing at a particular time but I am different. That I have tattoos and piercings does not matter. Some people that do not have all these things are worse. I do not sleep around; they have a very bad impression about me. When I am dating a person, I make it known. I do not have to hide it that I am dating somebody. If I am dating a person and the person trusts me, my family knows about the person and knows what I can do, I don’t care about what anybody says.

How I can change people’s perception of me

Sometimes when I am going out, my boyfriend will want me to wear a pair of jeans and a shirt so that I will be able to correct the impression people have about me. But will I now cover my face to let people believe that Tayo is a holier than thou? Believe what you want about me, but as for me, I am so down to earth. I am just me. Some things some girls do, I cannot do them.

I am starting a very big project that will cost me about N15m. I am going into waste management. That is all I can say about that.

She is going to be 16 years old in December; I had her when I was 21. Her name is Damilola and she is in SS3 now. She is not into acting. It happened when I was young. I had finished my SSCE. I was home then, it just happened. He was not my first but my second. When I told him, he claimed responsibility. The last time I saw him, my daughter was a year old. He lives in the UK. He used to come sometime ago but not anymore. It has not been easy being a single mother, but I always have time for my daughter. I am so fond of her. She is more like my sister.