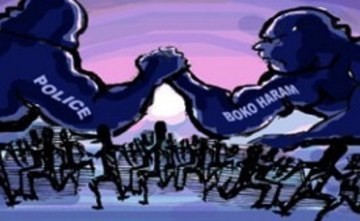 The call by the Sultan of Sokoto and National leader of the Muslim faith, Alhaji Sa’ad Abubakar III, to grant total amnesty to the dreaded Boko Haram members was rather outrageous and unfortunate. In what has become a public show of genuflection, prominent Nigerians from the north has since echoed the sentiments of the sultan to grant amnesty to a terrorist sect that has received funds and training from global terror groups, such as al-Qaeda and al-Shabaab. The insurgents have almost collapsed the economy of North-East, leaving more than 4,000 people dead and thousands injured. The sultan has emboldened others in the drum beat of amnesty that has eclipsed public discourse in the weeks that ensued, and surely for a long time to come. One would have expected to hear a better argument than the reframe that suggests; If the Niger Delta militants were pardoned to bring about peace and security in the country, why would same not be extended to Boko Haram? I will revert to this shortly.

My first thought on President Jonathan’s disapproval of the sultan’s amnesty call was commendation. I reasoned he struck the right note for once but on a closer look at his remark, I was crestfallen. President Jonathan said: “For you to declare amnesty, you have to be communicating with people. You cannot declare amnesty for people that are communicating under a veil…” This can be rephrased to insinuate, as soon as they identify themselves and declare their intention, the government will consider granting them amnesty. And with the pardon gate flung open by him for Alamieyeseigha and others, this might prove to be a tricky one for the president, particularly as there are cheap political points to pick up from the north ahead of the 2015 general elections.

The amnesty that was granted to the Niger Delta militants should not in any way translate or equate to same for the Islamist fundamentalist. The agitations of the militants then, to some extent, was germane save for the violence. They were been ripped off by multi-nationals leaving them and their environment marginalized and underdeveloped even though their zone produced the oil that provides for the entire country. They agitated for resource control. They wanted their lives to be touched by the oil that was been explored daily from their neighbourhood. We all agreed, at some point in the their struggle, that the Niger Delta region has been neglected for too long. Regardless of the sympathy their plight elicited, their resort to armed banditry was condemned in strong terms.

Juxtapose with the Boko Haram uprising and its attempt to forcefully impose a religious ideology on a secular Nigerian society. The terror, senseless and wanton destruction of lives and property they have unleashed on Nigerians in a gutsy bid to oppose not only Western education, but western culture and modernisation is despicable. Their acts of terror have gone from the horrendous to the tragic as reflected in the ghastly suicide attack on five luxury buses in Kano that left about 25 people dead and over 50 others injured. These attacks are based on a warped and shallow religious ideology; the islamisation of Nigeria. They ignorantly disdain anything western, but wittingly get by daily with the help of simple machines, the very symbol of western influence in our lives. The blood of Nigerians should not atone for such a cause that does not only trivialize what amnesty stands for, but it seems to suggest that the activities of the sect are legitimate and tolerable. Niger Delta militants focused their attacks on oil installations and multi-national oil expatriates hostage, but Boko Haram is engaged in indiscriminate killing and maiming.

There is a thin line between amnesty and negotiation (dialogue) in the light of the controversy raised by the sultan’s comments. To canvass for amnesty is to promote the culture of crass impunity that desecrate the sanctity of human life. The government can sit with the leaders of the sect, if they wish to reveal themselves, for dialogue. Whatever be their demands, excluding amnesty, can be met by the government. As Bill Clinton rightly pointed out recently while in Nigeria, deprivation, illiteracy and poverty are root causes of Boko Haram. The government can dialogue with the sect for a cease fire and then develop the region, by creating employment and putting infrastructure in place. At this juncture, we must all come to the realisation that sometimes battles are not won with brute use of military force but on the table of dialogue.

The United States and other developed countries posit that they don’t negotiate with terrorists because they have the capacity and intel to crush – in the case of al-Qaeda, the killing of Osama Bin Laden – the terrorists. Same cannot be said of Nigeria where there has been nothing to show for billions voted for security in the last few years. Security issues should be holistically approached because it takes more than JTF boots on the ground, armed to the teeth in troubled states to restore peace and stability.

There is a bigger picture to the diversionary and ill conceived amnesty being canvassed for the Islamic extremists. The government will be sending a wrong signal to the teeming population of unemployed Nigerian youths and yet another dangerous precedent after the amnesty to Niger Delta militants. It is akin to presidential pardon to felons, or a national honour which is a reward for criminality.  It will only buck up splincter sects like, Ansaru, and new rebellion from other parts of the country.

And if the government were to give unconditional pardon to the Boko Haram, will the government use the same methods of rehabilitation and reintegration for the Niger Delta militants? Skill acquisition centres, training and re-training methods at home and abroad? How will the government change their mentality to prepare them for their return to mainstream Nigeria? Whichever approach the government intend to employ, it will be a clear negation of the sects’ ideology of abhorrence for anything western. It is not rocket science that their angst with the government has nothing to do with money. All they seek is that sharia be entrenched across the country.

Amnesty should not be a leeway for the Nigerian government to wriggle itself out of security challenges. Only a weak government, with its security and anti-corruption agencies bereft of ideas reward criminals, militants, extremists, rapists and ex-convicts with pardon. Granting amnesty to Boko Haram is a latent approval to other forms of social vices and a continuum of the vicious cycle of legalised lawlessness.

Finally, there is a need to understand the Boko Haram agenda before contemplating amnesty for the sect. They are part of a global network of terror. Their Jihad is not motivated by money but a relentless drive in their fanatical religious ideology of eradicating all forms of western influence on the African continent using Nigeria and Mali as springboards. The promise of material wealth that an amnesty holds for the sect is a disincentive. The counter-terrorism war has never been won anywhere in the world with amnesty.