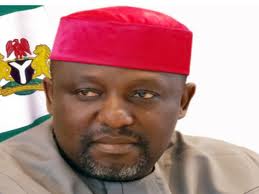 Apparently  angered by his romance with the newly-formed All Progressives’ Congress, APC, the Peoples Democratic Party, PDP, yesterday, descended on the Imo State Governor, Owelle Rochas Okorocha, describing him as a failure and a disappointment to the people of the state.

PDP accused Okorocha of squandering the goodwill and support of the people by failing to deliver any tangible project nearly two years after he assumed office, regretting that they made a big mistake in entrusting the state to the governor.

PDP National South-East Vice Chairman, Col Austin Akobundu (rtd), in a statement, challenged Okorocha to point out any project he had started and completed since assumption office in 2011, accusing him of being clueless, unfocussed and unprepared to tackle the challenges of the state.

Akobundu said, “Under Okorocha’s watch, Imo has slipped into the failed states category. A state that was once celebrated for strides in education, peaceful co-existence and environmental renaissance has rapidly descended into a beehive for criminality and ecological disaster as a result of abandoned road projects by the Okorocha government.”

But Okorocha fired back at the PDP, calling them a bundle of ungrateful elements, claiming that he had put the party to shame by spreading monumental development projects to all parts of the state unlike what obtained when the last PDP governor held sway for eight years.

The governor, who spoke through his Special Adviser on Media, Mr. Ebere Uzoukwa, warned that he was ready to use his membership of APC to flush out PDP from Imo State and the entire South-East so as to pave the way for the emancipation of the geo-political zone and its people, who had been denied development for about 15 years by PDP.