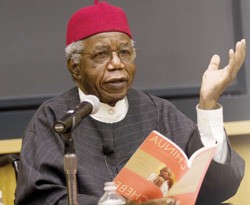 “If you don’t like someone’s story,” Chinua Achebe told The Paris Review in 1994, “write your own.”

In his first novel and masterpiece, “Things Fall Apart” (1958), Mr. Achebe, who died on Thursday at 82, did exactly that. In calm and exacting prose, he examined a tribal society fracturing under the abuses of colonialism. The novel has been assigned to generations of American high school and college students — my college dispatched a copy to me before my freshman year.

In many respects “Things Fall Apart” is the “To Kill A Mockingbird” of African literature: accessible but stinging, its layers peeling over the course of multiple readings.

“Things Fall Apart,” its title taken from William Butler Yeats’s poem “The Second Coming,” has sold more than 10 million copies and been translated into some 45 languages. Time magazine placed it on its list of the 100 best English-language novels from 1923 to 2005.

The novel tells the story of Okonkwo, a stoic clan leader and former wrestling hero who returns to his village after seven years in exile. (He’d been sent away after his role in an accidental death.) The changes that Christian missionaries and other white men have brought are intolerable to him. “Things Fall Apart” rolls toward a bleak denouement.

What sticks with you about the novel is its sensitive investigation, often through folk tales, of how culture functions and what it means. Mr. Achebe (his name is pronounced CHIN-you-ah Ah-CHAY-bay) had plenty to say about notions of traditional masculinity, as well, not to mention his braided observations about nature, religion, myth, gender and history.

The novelist grabbed the subject of colonialism “so firmly and fairly,” John Updike wrote in The New Yorker in the 1970s, “that the book’s tragedy, like Greek tragedy, felt tonic; a space had been cleared, an understanding had been achieved, a new beginning was implied.”

Growing up in Nigeria, Mr. Achebe attended schools that were modeled upon British public schools. In his recent book of essays, “The Education of a British-Protected Child” (2009), he was eloquent about what it felt like as a young man to read classic English novels. They provided a cognitive dissonance he had to work through.

“I did not see myself as an African in those books,” he wrote. “I took sides with the white men against the savages.” He continued: “The white man was good and reasonable and smart and courageous. The savages arrayed against him were sinister and stupid, never anything higher than cunning. I hated their guts.”

Mr. Achebe grew up, and grew wiser: “These writers had pulled a fast one on me! I was not on Marlowe’s boat steaming up the Congo in ‘Heart of Darkness’; rather, I was one of those unattractive beings jumping up and down on the riverbank, making horrid faces.”

Mr. Achebe was a poet, professor, short-story writer and critic in addition to being a novelist. His more than 30 other books include the novels “No Longer At Ease” (1960) and “Anthills of the Savannah” (1987). He published several children’s books. He was also the author, controversially, of an essay called “An Image of Africa: Racism in Conrad’s ‘Heart of Darkness.’ ”

While many critics defended Conrad, Mr. Achebe didn’t back down from his assertion that the racism in Conrad was not merely the norm for its time. In a book of essays he quoted earlier writers who, he said, were less backward.

Mr. Achebe was a mentor and role model to a generation of African writers — he’s often referred to as the father of modern African writing. But like many novelists who find success with an early book, Mr. Achebe found himself almost solely defined by “Things Fall Apart.” He spent the last two decades in the United States, teaching at Bard College and then Brown University.

It’s been more than 50 years since the publication of Mr. Achebe’s pioneering and canonical novel; it no longer seems to stand, to a Western audience at any rate, for African writing as a whole. His talent and success have helped spawn an array of postcolonial writing from across the continent. Among the talented young Nigerian writers alone who cite him as an influence are Chimamanda Ngozi Adichie, Adaobi Tricia Nwaubani and Lola Shoneyin.

In 1990 Mr. Achebe was paralyzed from the waist down in a car accident in Nigeria. The following year he gave an interview to Bradford Morrow in Conjunctions magazine.

Mr. Morrow asked him about the accident, and Mr. Achebe spoke about it with stoicism and good humor. “Children are born deformed,” he said. “What crime did they commit? I’ve been very lucky. I walked for 60 years. So what does it matter that I can’t for my last few years. There are people who never walked at all.”

“Things Fall Apart” is, at base, about the strength that human beings find in community. His car accident offered him similar lessons. “It is an opportunity,” Mr. Achebe told Mr. Morrow. “It’s a lesson. It’s so much. It is an enrichment. I’ve learned so much. I’ve learned how much we depend on each other.”