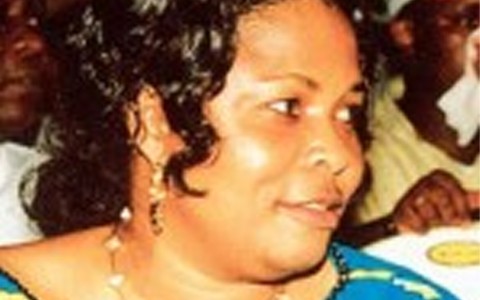 In seeking to knock this article into shape a lot of captions competed for attention; such titles as ‘The First Lady’s Lazarus Experience’, ‘Our First Lady’s ‘Resurrection”, ‘Playing Lazarus In Modern Nigerian Times’. As a writer it is normal for one to have to deal with issues of this kind and personally I have had cause to deal with it weekly on many occasions but somehow one must decide on what is best suited for the piece as a caption to deliver the message in summary. In this case I had decided to settle for the above because I considered it most appropriate but whether my judgment is right or not is open to debate.

Last Sunday the first family organised a lavish “N500 million” thanksgiving service/bash in Abuja. Special guests from abroad (including former Ghanaian President John Kufour) VIPs, Nollywood superstars ‘Aki’ and ‘Paw-Paw’ and men of God were all present to assist in the jamboree. Abuja was reportedly shut down as the who-is-who of the society joined forces to give thanks to the Most High for performing a ‘miracle’ in the life of the presidential spouse. Perhaps the only high-profile big man absent for obvious reasons was the ex-President (and GEJ’s benefactor and godfather) Olusegun Obasanjo. But former Head of State, Gen. Yakubu Gowon and Aisha Babangida representing his indisposed father (IBB) were there.

In the presence of the dignitaries including the President himself the First Lady Dame Patience Jonathan opted for full disclosure as against the recent climate of subreption surrounding her state of health and ‘disappearance’ for months late last year. In an interesting confession in deference to the Omnipotent Doctor she narrated: “It is the Lord’s doing that I returned alive. When God says yes, nobody can say no. People are always afraid of operation (surgery). But in my own case, while my travail lasted, I was begging for it after the third operation because I was going to the theatre every day. It was God who saw me through. I did eight or nine operations within one month”.

And continuing she added: “It was not an easy experience for me, I actually died. I passed out for more than a week. My intestine and tummy were opened. I am not Lazarus but my experience was similar to his. My doctors said all hope was lost. It was God himself in His infinite mercy that said I will return to Nigeria. God woke me up after seven days.” Wonderful! Bravo Dame Patience Jonathan for electing (even belatedly) to speak the truth!

It would be recalled that soon after her ‘triumphant’ return from Germany Dame Patience Jonathan had declared shamelessly that she was never hospitalised in any hospital anywhere! Such bare-faced aversion for truth does not help anyone’s image or credibility. But it was in keeping with the ‘Yar’Adua syndrome’, one in which public officials decided to keep their ailments away from the public knowledge for reasons best known to them. We saw it play itself out in bizzare fashion in Enugu with the Governor (Sullivan Chime) who spent more than four months in hospitals in India and London treating cancer only to return home recently to say that he never had any apology or explanation to give to anybody! During the medical sabbatical Chime kept mum abroad while his goons back home struggled to maintain series of befuddling lies that never corresponded with reality.

The Dame lamented how trusted associates and relatives sold off her personal belongings thinking that she was indeed dead and gone for good accusing those she trusted of leaking the information of her one week sojourn in a trance. In Igbo language our elders used to say: “onye nwu’o ihe ya anwu’o” (whoever dies have their things gone with them). Like the literary immortal Shakespeare reasoned we are all here as players in this life that remains a stage; we come and go while playing our parts in a complex global natural order of things.

The president’s son caught my attention as the photographs of the great party were posted online. Looking majestically well-fed (sorry over-fed) in his dashing suit the young boy looked every inch like the son of the late Idi Amin Dada of Uganda whom the cannibal dictator promoted to a “General” during his kleptocratic megalomania in Kampala. Oblivious of the misery in the land and the suffering of millions of kids his age up north and down south the Goodluck junior was resplendent in his smart suit enjoying the paradise around him. The opulence of a few elite and the poverty of our people could not make any sense to him! But thank God though he was not pictured, quite unlike the son of the late President Yar’Adua, marooned in a heap of dollars, pounds and naira holding assault rifle and ready to pull the trigger!

When the Dame “died” one is wondering what was going through that unconscious mind, that ‘raptured’ spirit that took temporal flight for the unknown ostensibly oscillating restlessly between heaven and hell. When our First Lady “died” and “resurrected” in far-away Germany the Dame must have thought about Lazarus with the returning spirit taking cognisance of the fierce urgency of the now purely spiritual; the spirit inhabiting the body must have given room for the manifestation of the spiritual ‘transformation’. When she was knocked out cold and unconscious Aso Rock must have been thrown into a rare presidential grief with the Commander-In-Chief in an uncommon melancholic mood!

As the spirit returned, following the Dame’s untimely ‘demise’, desperate to re-possess the comatose body in dizzying fashion, it must have encountered certain forces mundane hell-bent on leaving things as they were; that is, letting the sleeping female ‘dog’ lie and achieving the set objective of resting the body for good! And putting a fitting end to the delusion of grandeur of the ‘deceased’ Okrika woman, the Permanent Secretary in Bayelsa State, the ‘President’ of African First Ladies.

The First Lady lying comatose and breathless must have conjured the image of home without her imposing presence, her husband and her ‘rivals’; her children and above all the millions and billions stashed away, garnered through connubial corruption! Mundane possessions aside, the “resurrected” body would have been imagining what could have been if the benevolent spirit never returned to take possession of the abandoned body left in a heap of hopeless finitude!

The First Lady should have also spared a thought about the fate that would have befallen her proposed N4 billion edifice in Abuja that will accommodate an aberration that calls itself the “African First Ladies Peace Mission” were she to have ‘died’. Perhaps Hajia Turai Yar’Adua could have had the last laugh in their protracted Abuja land tussle since her chief disputant would have gone like her husband did in medical circumstances shrouded in mystery!

The Dame declared with glee that she was ‘resurrected’ from ‘dead’ like Lazarus; that then meant that her faith in the things of the spirit, divinity, was indeed worth applauding here. We never knew, before now, how deep her relationship with her Maker was! Whosoever benefitted from the kind of Lazarus-like miracle as she did must eternally be grateful to Jehovah and His Angels for their celestial capacity for doing good and forgiving human transgressions. The Dame has transgressed on more than one occasion and she knows it!

The Lazarus story found in the Holy Bible remains a strikingly remarkable tale of miracle administered by the Saviour Himself, Jesus Christ of Nazareth! Lazarus, the dead brother of Mary and Martha, had been buried before the only begotten Son of God was notified of his demise three days after. On reaching his grave-site Jesus wept, uttered a prayer and raised Lazarus from dead! Apart from the glorious resurrection of Jesus the Christ three days after His crucifixion no other miracle could have matched that of Lazarus brought back to life after some three days’ spell in the great beyond!

We rejoice in our First Lady’s recovery from her ailment. We wish her long life and sound health and prosperity guaranteed by her husband’s presidential occupation! Her tale of ‘death’ and ‘resurrection’ ought to be celebrated indeed — something the first family did in style last Sunday. It is perfectly fitting that she organized such a thanksgiving to give God the glory and genuinely thank Him for His faithfulness. Recognising that her life, like those of the rest of us, lesser mortals, is in the hands of God, and not German doctors, and giving a moving testimony of her medical trajectory is enough reminder of our collective mortality despite our earthly possessions.