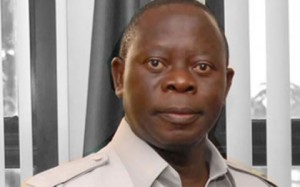 Governor Adams Oshiomhole of Edo State has rejected a multi-million naira proposal by Minister of Information Labaran Maku asking him to bankroll the so-called “Good Governance Tour” he is leading around the country.

Speaking at a seminar on tax laws in the state on Benin on Tuesday, Mr. Oshiomhole said he was not prepared to waste the state’s limited resources on an unnecessary  project conceived and promoted by the federal government.

“It is not proper to use Edo State tax payers’ money to finance a Federal Government programme,” the governor said. “If they pay me a courtesy visit, I will receive them, but I don’t have a dime to spend on them because I do not need them to come to tell Edo people how I built roads and schools. My achievement speaks for me.”

He revealed that Mr. Maku’s team had sent in a proposal requesting him to provide accommodation, feeding and logistics for over 120 delegates when they visit the state next week. He said he opposed the proposal when it was tabled for discussion at a Governors’ Forum meeting sometime ago.

“Whenever Edo State government officials travel to Abuja for official duties, the state takes responsibility and not the Federal Government,” Mr. Oshiomhole said.

Mr. Maku has been travelling around the country with a team of about 120 people, saying he was inspecting projects undertaken by state and federal governments.

Many see the tour as a jamboree packaged to corner public funds. But Mr. Maku has explained that the tour was conceived to showcase good governance by states and the federal government.