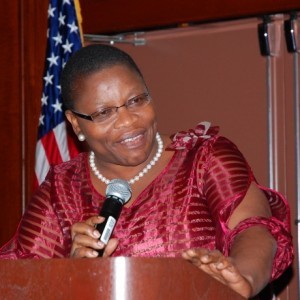 At a convocation lecture of the University of Nigeria, UNN, Dr Oby Ezekwesili made an observation about “the squander of the significant sum of $45 billion in foreign reserve account and another $22 billion in the excess crude account being direct savings from increased earnings from oil that the Obasanjo administration handed over to the successor government in 2007.” President Jonathan’s government was fingered in the squandermania.

Ezekwesili’s remark did not bring anything new to public consciousness, as it is now routine for public funds to be misappropriated by political office holders but it was the humongous sum involved that ruffled feathers of today’s men in power.

The response of government was nothing short of tirade and razzmatazz of phantom statistics bandied about by presidential spokesmen – today’s men – which was very far from convincing. The least expected of the government is to engage its critics, the reason Ezekwesili has challenged them to a debate, which they turned down.

Presidential spokesmen took turns to pour invectives on her, the vulgar language of Jonathan’s aides, unbecoming of a responsible democratic government. Hell was let loose by an administration with a reputation for half-truths and distortion of facts in responding to critics who they consider perceived enemies of government. Rather than explain to Nigerians how the $67 billion (about N11 trillion) was spent, a group of today’s men, took turns to mudsling as they saw an orifice to cast aspersion on her tenure as education minister. It is as well a known gimmick of the government to vilify yesterday’s men with their performance in office when criticised just as it is now habitual, to wave aside questions raised as just another ranting of a yesterday’s man who equally “squandered” funds as a public officer. The signal the present administration is sending is that it is not open to critique and accountability. The frivolous expenditure of Nigeria’s $67billion foreign reserve, should not be swept under the carpet with diversionary broadsides and cheap blackmail.

Presidential aides challenged Ezekwesili to account for billions that were allocated to the Ministry of Education when she was in charge. The billions budgeted for the education ministry, was disbursed to various agencies, parastatals, government owned tertiary and secondary schools across the country. Salaries alone gulped 74% of allocated funds to the ministry. If the government truly had a case, by giving Nigerians the impression that money was siphoned to her personal account and office, why the failure to invite the EFCC to prosecute her for wrong doing?  Asking for Budgetary allocation to her Ministry when she was in charge before she resigned her appointment to join the World Bank as Vice-President was an attempt to cast aspersion on the image of the messenger and deflect attention from her message. That she resigned alone speaks volumes, not many yesterday and today’s men in the corridors of power will resign from a cabinet.

The presidency described her claim as “factually incorrect, outlandish and clearly fictitious,” Nigerians expected that the same  government would have accepted the challenge to a debate by the former minister of solid minerals as it would have afforded both parties an avenue to put the record straight. Her antecedents as former Vice-President of the World Bank founding director of the global anti-graft body, Transparency International and Minister of two different ministries gives her the requisite pedigree and knowledge to ask serious accountability questions from the government of today. She was also the pioneer head of the Budget Monitoring and Price Intelligence Unit, popularly known as the Due Process Unit ( where she was fondly called “madam due process”) under the Olusegun Obasanjo administration for which she was better known, saving over N60 billion from audit of multi-billion naira government contracts. She was one time Chairperson of the Nigeria Extractive Industries Transparency Initiative (NEITI) and spearheaded the first ever audit of the nation’s oil and gas sector.

It was the height of blackmail for a today’s man to accused Ezekwesili of a “limited understanding of government finances.” Only in Nigeria, will the excellent track record and financial savvy of a former World Bank Vice-President be called to question or equated to the pedestrian noesis of a political jobber.

If Oby Ezekwesili is guilty of peddling lies in her convocation lecture speech as presidential spokesmen will have us believe, why wait till now before raising alarm of financial recklessness against the former education minister? Does it not amount to negligence on the part of the present administration that yesterday’s men whom they now consider corrupt were not prosecuted for misappropriation of public funds?

The Jonathan administration has unfortunately, failed woefully to build on the legacy bequeathed to him by his predecessor by improving on the nation’s foreign reserves and ensuring we remain debt free as a nation. Serious government in other climes would have seen Ezekwesili’s remark as a wakeup call to take drastic steps and make amends where necessary.

The government’s rhetoric was a familiar tactics to divert attention from the $67 billion poser. Ezekwesili, in her reaction to Labaran Maku’s statement averred “i remain resolute in demanding full disclosure and accountability by the Federal Government on the issues of poor management of oil revenues – especially the Excess Crude Account and the Foreign Reserve Account.” Nigerians too will want to know how the money was spent.

In all of these, the silence of the current Minister of Finance who is both a yesterday and today’s woman is worrisome, or could it be part of the 2015 game plan?