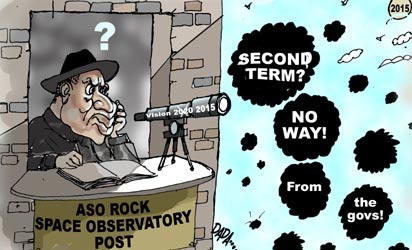 Even though he had pledged not to be dissuaded from the affairs of state by 2015 campaign drums, his rivals for the ticket are not giving up on provoking him into dancing.

President Goodluck Jonathan had months ago declared on national television that he would not dabble into the 2015 presidential election question until 2014.

His disposition nonetheless, the issue has now frontally caught up with his presidency following the disclosure by Governor Babangida Aliyu last weekend that the president signed an agreement with northern governors not to contest the 2015 presidential election.

Speaking on a radio programme in Kaduna, Governor Aliyu had declared that the president agreed with northern governors that he would serve for only one term in a bid to allow the presidency to revolve back to the north in 2015.

“I recall that at the time he was going to declare for the 2011 election, all the PDP governors were brought together to ensure that we were all in the same frame of mind.

“And I recall that some of us said given the circumstances of the death of President Umaru Yar’Adua and given the PDP zoning arrangement, it was expected that the North was to produce the president for a given number of years.”

“I recall that at that discussion, it was agreed that Jonathan would serve only one term of four years and we all signed the agreement. Even when Jonathan went to Kampala, in Uganda, he also said he was going to serve a single term,” the Niger governor had declared.

Following his declaration on Saturday which was widely reported in the newspapers the following day, Governor Aliyu resorted to silence. Indeed, he reportedly ordered his aides and associates not to respond to comments or questions from journalists on the issue.

Governor Aliyu who is in his second term it is believed, would be a direct beneficiary should the president opt out from the 2015 contest. Besides him, a number of second term governors in the north inching to advance in the political ladder would also benefit from the non-participation of the incumbent in the contest.

Aliyu’s assertion of an agreement was immediately dismissed by presidency officials with the political adviser, Ahmed Gulak saying that there was no such agreement.

But multiple sources disclosed to Vanguard that efforts towards nudging Jonathan to an agreement were made by northern stakeholders operating from different fronts.

The first move apparently came from PDP governors many of whom in the first instance, had been opposed to the emergence of Jonathan as acting president in the wake of the crisis sparked by the ill-health of President Umaru Yar‘adua in 2010.

Following the death of Yar‘adua many of the governors quickly came round to support Jonathan, but those who were serving their second terms like Bukola Saraki still sought ways of getting the advantage over Jonathan in the 2011 contest. But willy-nilly Jonathan with the power of incumbency persevered pulling through a decisive victory even after the PDP governors had attempted to block a meeting of the national executive committee, NEC meeting of the party in December 2010.

The governors who command the majority of members of the NEC had in backroom discussions sought to frustrate the meeting of the NEC leading to the presidential primaries until they proved their point.

The NEC meeting which eventually held on December 16, 2010 reached a communiqué which was read by Governor Ibrahim Shema. The communiqué of the meeting read thus:

• Entrenched democratic culture persistent in presidential system and our constitution entitles our president to go for a second term which the PDP governors support.

• The governors also recognise the Yar’Adua/Jonathan ticket and therefore hereby support President Goodluck Jonathan (GCFR) to contest the 2011 election as the PDP presidential candidate for a period of four years only.”

That meeting was the turning point in the governors’ support for Jonathan who on his part described them as field commanders of the party who should not be joked with.

“The governors are the commanders in the state and as field commanders you cannot play with them,” the president was reported to have said at the end of that meeting.

In appreciation of the support he got from the governors the president also moved to appease them in several ways including the dismissal the following month of the then national chairman of the party, Dr. Okwesileze Nwodo.

That communiqué has been described as the currency of the agreement. However, many have dismissed the credibility of the communiqué as some have said that the president cannot be tied by it.

Another attempt to bind the president to a single term was made through the platform of the G15, which had been set up by the Northern Political Leaders Forum, NPLF to help it in its choice of a northern presidential candidate.

Atiku Abubakar who had been chosen as the choice of the NPLF to represent the north in the PDP presidential primary, Vanguard learnt, had been approached by Jonathan for support after the primaries. Atiku it was gathered had resorted to the G15 on whether he should meet with Jonathan and he was given the go ahead.

When Jonathan eventually met with Atiku at the residence of Mallam Adamu Ciroma in Abuja he came with Anthony Anenih, the acting national chairman of the PDP Haliru Mohammed Bello to the meeting which saw Ibrahim Babangida, Aliyu Gusau among other eminent leaders from the north.

While they discussed some sought to put the issue of Jonathan serving one term but the issue was never seriously pressed and Jonathan was not really tasked on it.

One participant in the meetings told Vanguard this week that the northern leaders never expected Jonathan to sign an agreement given the fact that the Southeast is also hovering to get a bite at the presidential villa in 2015.

“If he had signed an agreement with us it could have been political suicide for him as it would have made him vulnerable among his supporters in the Southeast who are also desirous of getting the presidency in 2015,” a member of the G15 told Vanguard.

The deadlock did not stop former President Olusegun Obasanjo who was working quietly also to mobilise northern support for Jonathan. It is alleged that Obasanjo was able to get Babangida, Atiku, Gusau to support Obasanjo in exchange for Jonathan doing one term.

As part of the agreement Atiku, Babangida and Gusau were expected to endorse Jonathan at the final PDP presidential campaign rally in March 2011 in Abuja. Indeed, seats were reserved for the trio who, however, failed to show up at the last minute.

The debate is still out there whether Jonathan was part of the alleged accord or not. It was based on Obasanjo’s understanding of such an agreement that he, Obasanjo declared at the rally that Jonathan had agreed to serve one term.

Obasanjo had said: “We are impressed with the report that Dr Goodluck Ebele Jonathan has already taken a unique and unprecedented step of declaring that he would only want to be a one-term President.

“He has taken the first good step, let us encourage him to take more good steps to achieve what we need to achieve for this country by voting for him in landslide victory as the first elected President of Nigeria on basis of our common Nigerian identity and for the purpose of actualising the Nigerian dream.”

The face off between Obasanjo and President Jonathan it was learnt, emanated from perceptions by the former that the incumbent president was about going back on the declaration. Pressure is now on Obasanjo from his northern associates to speak out on the issue.

Presidency officials are, howhttp://omojuwa.com/wp-admin/post-new.phpever, insisting that the president is not bound by any such agreement that for now remains in the field of imagination. Speaking through the Senior Special Assistant, Public Affairs, Dr. Doyin Okupe, the President insisted on not being distracted by the 2015 debate.

In a statement issued on Wednesday, Okupe said: “Our attention has been drawn to issues raised by some political leaders to the effect that President Goodluck Jonathan signed an agreement with some Governors elected on the platform of the Peoples Democratic Party prior to the Party’s presidential primaries in 2011.

“From time immemorial, for every major event or contest in the world, there is always a time and a season apportioned. We wish to state categorically that this is neither the time nor the season to begin electioneering campaign or related discourse for the 2015 presidential elections and so  President Goodluck Jonathan will not jump the gun.

“Mr. President will therefore stoutly resist any disguised or open attempt to drag him into any debates, arguments or political discussions relating to a presidential election in 2015.”

Whether the president responds or not, his rivals in the 2015 contest have already dragged him into the battle.