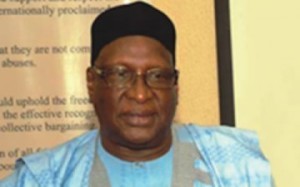 It was billed as mission impossible by cynics who have seen past attempts at mergers and alliances by political parties fizzle at the altar of outsize egos and gargantuan ambitions. And, the speed with which four major opposition parties announced the formation of the All Peoples Congress (APC) was, to say the least, dizzying.

Of all the reactions to the event, the one I found most entertaining was that by the national chairman of the ruling Peoples’ Democratic Party (PDP), Bamanga Tukur. At a time when Nigeria’s football team, the Super Eagles, decided to shock a jaded nation with its exploits in South Africa, it was not surprising that Tukur would succumb to a sporting metaphor to respond to an equally unscripted political development.

“If they have the strength why do they come together?” he wondered. “If you go for a contest you have the striker, you know Lionel Messi, PDP is Messi in the contest. They (opposition) are not a threat at all, it is better; it will inspire PDP to action.

For the uninitiated, Lionel Messi is the pint-sized Argentinean dynamo who plays for the top Spanish La Liga side, Barcelona. He is quick, consistent and skilful beyond belief. Those are not words that you would ordinarily use to describe the PDP – a lumbering, bumbling, unwieldy assemblage of disparate interests welded together for so long, by the sole fact that in 13 years it has remained the surest path to power at the center.

I didn’t expect Tukur to react to the news by saying he and his party men were shaking in their boots. Although, PDP’s National Publicity Secretary, Olisah Metuh, did issue a statesmanlike statement welcoming the merger, some leading members of his party have been to quickly dismissive.

On the face of it they have grounds to be so cavalier. In 2011, Muhammadu Buhari’s infant Congress for Progressive Change (CPC) and the Action Congress of Nigeria (ACN) went into a late-hour mating dance. The alliance effort was half-hearted, but more critically, it was grievously ill-timed coming as it did just a few weeks before polling day.

Many will also recollect another chaotic attempt at electoral collaboration in 1999. By the time of elections, leaders of the Alliance for Democracy (AD) who had dashed in and out of the nascent PDP and All Peoples Party (APP) for all manner of reasons, found themselves boxed into the South-West.

The only way to power at federal level was to cooperate with the then APP which appeared to enjoy some popularity across the northern states. It turned out the APP’s supposed strength was exaggerated. Some of its leading lights like Umaru Shinkafi whom the AD-APP alliance was depending upon were roundly trounced. More than incompatibility, the 1999 failure was more because the collaboration was rushed – leaving no time for adequate mobilisation of the people and familiarisation with the political platform.

Again, one of the reasons why such mergers and alliances had failed in the past was down to the presence of larger-than-life figures who led the potential partners, and whose ambitions stood in the way of genuine cooperation.

When they were alive the ambitions of the likes of Chief Obafemi Awolowo and Dr. Nnamdi Azikiwe, were considerable cogs that made any talk of cooperation between the defunct Unity Party of Nigeria (UPN) and Nigeria Peoples Party (NPP) little more than a pipe dream.

Many will see in the APC that same challenge given that Buhari still dreams of reaching the presidency. Some in the new partnership believe he remains a hard sell in other parts of the country, and prefer he anoints a younger individual around whom the new party can rally. But there’s no sense that the general has decided to sacrifice his aspiration. The only light at the end of the tunnel might be that the other parties have decided to live with the reality that the general will run one final time.

Of course, many PDP strategists believe Buhari can never win an election in Nigeria. That much has been said by Dr. Doyin Okupe, Public Affairs Adviser to the President. Since we are still throwing football metaphors and analogies around, I might just add that in politics as in sport anything is possible. The current Super Eagles team at the African Cup of Nations went there unheralded. Many expected them to be humiliated by Cote d’Ivoire. Today, they will be playing in the finals against another underrated and unheralded bunch of no-hoppers – Burkina Faso!

I suggest that rather than laugh and think that it will be business as usual, the PDP should be worried for all manner of reasons. Even if the opposition does nothing else, they have managed something major with the creation of the APC given their differences and the personalities who have agreed to subsume parties where they were once lords and masters, and join a bigger team where they will just be one of the major players. In Nigerian politics that is not something to sneer at.

Will there be disagreements? Of course, there will be. Will someone people suddenly make an about-turn when they fail to get what they hoped for? Depend on it! Will some people starting carping about a lack of ideological purity? Of course, they will.

But like the pragmatic former British Prime Minister, Tony Blair, once told his nitpicking colleagues in the then opposition Labour Party: even if you have the best ideas you can never do anything about them for as long as you remain in opposition. His message was clear: Labour had to downplay the ideological grandstanding and find ways to make themselves electable.

In the very existence of the APC today, Nigerian opposition politicians are finally waking up to the reality that PDP could govern for 60 years, as they have threatened to, unless they find a way to make themselves electable.

Another reason the PDP should worry is that the key pillars in the new party have strength in two zones with the greatest haul of electoral votes: North-West and South-West. With that as foundation and with pick-ups in other zones, they can easily make the constitutional requirement of winning one-third of votes cast in two-thirds of the states of the federation. Believe it or not, there is a clear path way to Aso Rock for the APC.

Lying like a time-bomb in the belly of the PDP is the President Goodluck Jonathan factor. Will he run or will he not? After the bitter zoning battles of 2011, and the unwritten understanding that he will govern for just one term, another bid by the incumbent is bound to fracture the party – to the benefit of a new, credible platform with a realistic chance of going all the way.

Another factor the ruling party has to be concerned about is PDP-fatigue. Across the world the electorate often gets to a point where they just become bloody-minded, tired of the same old faces, and would gladly throw them overboard if there is a credible alternative in sight. Margaret Thatcher was kicked out by voters after 13 years in power for similar reasons. Come 2015 the PDP would have been in power 16 years non-stop.

As a kid growing up in the 70s, I became familiar with a particular brand of analgesic called APC. The new opposition party can turn out to be Nigeria’s pain killer if its leading lights can show that their desire to get into power in order to implement their ideas is far greater than all their egos put together. That is the real challenge: forming the new party was the easy part.

Read original article via The Nation