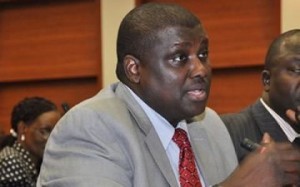 The Senate on Wednesday gave President Goodluck Jonathan a two-day ultimatum within which to sack the Chairman of the Pension Reform  Task Team, Mr. Abdulrasheed Maina, from the Federal Civil Service.

Senate President, David Mark, said this after a debate on a motion entitled, “Dismissal of Mr. Abdulrasheed Maina for refusal to appear before the Senate.”

The debate was sponsored by the Leader of the Senate, Victor Ndoma-Egba (SAN), and 107 senators, urging President Goodluck Jonathan to sack Maina from the public service. The Senate has 109 members.

Reacting to the Senate resolution on Wednesday, the PRTT said only God would save Nigeria.

“Maina has never committed any offence to deserve this high level of persecution, even if he is an Assistant Director. We have done this assignment in the best interest of this country with all sincerity and honesty. It is only God that will save Nigeria,” spokesperson for the PRRT, Hassan Salihu, said.

According to Mark, the Senate as an institution has been pushed to the wall and can no longer tolerate the insolence of public officials working for the executive.

Mark said, “The executive has to choose between the Senate and Maina. He has crucified himself. If Maina remains, then the Senate would react appropriately.

“The Senate is not lacking in ideas on what to do. Nobody in this country is bigger than our democracy. I have been extremely patient with Maina, so that when we react, they will know that we have been fair.

“Whether the Police are serious about (arresting) Maina is something we are going to find out. This Senate is not going to allow this to linger on, if in two days they have not done anything, we can come here and convene and take a decision.

“This Senate has teeth to bite, the Senate will bite when it needs to bite; and when we decide to bite, there will be no room for escape.

“We have been pushed to the wall. The reaction is the correct reaction, no matter the depth of the Maina situation, nobody in this country will be left to go free, if he is associated with Maina, no matter who is behind Maina, we are not going to accept it.”

The Senate also resolved to summon the Inspector General of Police, Mohammed Abubakar, for failing to carry out an earlier order for Maina’s arrest as contained in a warrant of arrest duly signed and issued by the President of the Senate.

Resolutions passed by the Senate read: “That Mr. Abdulrasheed Maina be dismissed from the Public Service of the Federal Republic of Nigeria immediately and be disengaged from all acts relating to public duty.

“That the Inspector General of Police appears before the Senate Committee on Police Affairs to give reasons why he did not act on the warrant issued by the President of the Senate.

“That Mr. Abdulrasheed Maina be investigated and prosecuted.”

Mark, who presided over the session, recounted his experiences with Maina after several efforts made to make him appear before the Joint Committee of the Senate investigating pension administration in Nigeria.

The President of the Senate said Maina had been given enough time to defend himself, but he had instead used the time to crucify himself.

While presenting the motion, Ndoma-Egba said that all senators with the exception of the President of the Senate had signed in support of the motion.