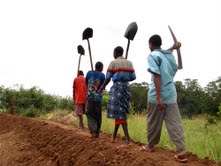 As far back as the early 80s – Nigerias post colonial Agricultural revolution recorded some remarkable feat in the global world. Farming became the imported old bride for the previously stone-aged dwellers having learned the rudiments during the pre colonial era and it was fully mastered by the end of the same era. Crop production, Fish farming and livestock production contributed greatly to the economy, between 1960 and 1970, the country’s GDP quadrupled while the other sector of the economy largely (dependent  on Agriculture) witnessed a steady growth. The land embellished with green vegetation, pastures grow in abundance for  the livestock grazing and nomadic farming was practiced devoid of ethnic violence. Rice silos and yam barns of different sizes built were visible along the farm boundaries, irrigation channels flowed freely to nourish the germinating foliages.  Nigeria’s cash crop market boomed, and we could hardly meet international export demand as volume increased incessantly. Neighbouring countries benefited immensely from our Agricultural exploit, the bilateral trade relationship flourished unimpeded.

Still In the 80s,  before the regime of General Ibrahim Babangida, the Nigeria currency- Naira exchanged for N0.765 against the U.S dollar, the appreciation of  the  Naira during this lofty days is as a result of the vibrancy in the Agriculture and  the manufacturing sector. This was a defining moment in Nigeria, before its very eyes, the Naira exchanged for $1, subsequently  corruption took its full swipe in the early 90s to signal the end of an era- “The Agricultural age”. Once these two key sectors (Agriculture and Manufactuirng) were neglected by the government the resultant corollary is the over reliance on crude oil which has further wobbled us down in the pecking order of developing country toiling to make an impression for close to three decades. Well, you want to know how weak the Naira is today compared to the early 80s? The devil they say is in the details.

The progressive march continued till the year 1998, agriculture once again precepts the direction of the our gross domestic product.  According to World Bank estimates, agricultural GDP increased at an annual rate of 2.9% in 1990-98. At the that time, Agriculture accounted for 40% of our non-oil foreign  exchange earnings, thus providing full time employment to about 70% of the active labour force of the population.

That was as far as  the “baby”  was incubated. Oil became the new Agriculture of my generation. Owning an oil block was more worthy than tilling the land.  Agriculture was brazenly neglected, this could be regarded as a conscious effort by the government as evidence in its annual budgetary allocation for the Agric Sector. Agriculture became sacrosanct  and you’d be adjudicated as one the less privileged Nigerian should you  insist on towing this uncommon path as a means of livelihood. Regrettably , this is where the youth today derived its conceived ideology that “The Poor will till the land for the rich” . Blame them not, blame the prejudice society who readily placed a low premium on Agriculture and its produce.

Today, a scarce white collar job will bring much more certainty than venturing into Agriculture with so much bewilderment. The local farmers are neglected to dwell in their crude outmoded way of farming and government looks on to the decay of this once vibrant sector. In the Nigerian context the real cause of hunger is the powerlessness of the poor to gain access to the resources they need to feed themselves. With the youth making up the larger proportion not much is done to empower them.  It is no longer attractive to the teeming majority, to engage in crop production , poultry or fish farm. The newest craze in the society justifies and celebrate ill gotten wealth while we are quick to cast aspersion on the poor but diligent ones. That is the challenge you and I face in the emerging trend of the current society we live.

Life on a farm requires patience, your input during the farming  season determines your overall output.  American Agriculturist Wendell Berry in his book, The Unsettling of America: Culture and Agriculture  wrote “The soil is the great connector of lives, the source and destination of all. It is the healer and restorer and resurrector, by which disease passes into health, age into youth, death into life. Without proper care for it we can have no community, because without proper care for it we can have no life.” We can agree here that everything revolves around the earth, what we make of it is entirely up to us. Most of us have transgressed from this mien, the consequences we reap by virtue  of our handy work. We no longer see the soil (land in this context) as the framework to support plant growth, the land entirely has a different meaning to us. Real estate, land poaching and bureaucracy take its toll.

Successive government lacks the prerequisite knowledge and technique to tackle youth unemployment taking advantage of the energetic youthful population. What we need is an Agricultural decentralization that will bring about genuine growth of the sector. Similitude to the type practiced in Ondo State and Kwara State. Under Governor Olusegun  Mimiko’s  “HEART” project birthed the Ondo State Agricultural Farm village project which debuts 1,500 graduate resident farmers. The agricultural village houses the young graduates and farmers equipped with modern agricultural facilities. This project sourced with  extensive training to reduce unemployment has catered for  the livelihood of over 10,000 young graduates since inception. Similarly, the former Kwara State governor Dr Bukola  Saraki now  a senator on Environment and  Ecology achieved one of the near impossible landmark in the agricultural revolution of the state by taking the bold step to revamp the agriculture sector. The Shonga farm project absorbed displaced Zimbabwean farmers with  access to 1000 hectares of land with a long commercial lease. Over 6,000 young graduates were employed as the production capacity expanded. Food security steadily increased in  the state, the Shongai farm activities which majored on dairy, poultry and mixed has a capacity for producing 12million broiler chickens per year,  as well as the potential of 50,000 litres of milk per day, which would potentially generate $12million for the state.

The aforementioned strides provides a modicum of hope that given the right leadership approach, dedication and selflessness other states can harness the opportunity in Agric to turn around the fortune of the state. Government needs to show  renewed commitment to meet the problems militating against Agriculture; Attention has been drawn severally to the use of crude tools and implements, lack of credit facilities as most banks do not  offer loans to small scale farmers. The financial institutions should be compelled to give loans to genuine farmers and the interest rate should be relatively low. Value chain disconnects, transportation, road networks, the land tenure system, proper storage of Agric produce, Agricultural education with sound extensive services and ultimately, a change in attitude of people towards Agriculture are but a few of the quandary in urgent need of attention.
Agric-loans granted to the government by professional bodies such as Investors Business Daily, Africa Development Bank, the World Bank and the Green Revolution programme should be channeled appropriately to develop this sector to improve our foreign exchange thus reducing over reliance on imported foods. Agricultural professional organisations and institutions in conjunction with the government must rise to meet the demands of the Agricultural sector, else the giant of Africa may end up begging for food from its immediate neighbours should the oil dry up by the year 2040 as envisaged by the experts. It is never too late to implement the right policies, Nigeria is staring famine in the face and we the youths are the solution to it.