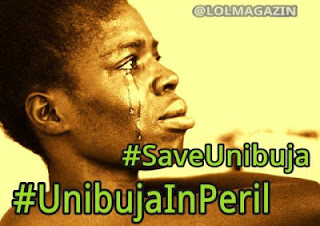 Its been two months and five days since the students of University of Abuja were unceremoniously asked to go home and the University was shut down due to student unrest over students protest as to the non-accreditation of certain courses. It would be the second time in 2012 alone that the institution would be shut down over the same issue. Now, we are in the last days January 2013, the school is yet to re-open and worst of all, there is no word from school authorities as to any date of resumption, let alone exams.

The protests which began on Monday, 19th November 2012, which was the scheduled date for the commencement of the University’s second semester exams, was ignited mainly by aggrieved students of the Faculty of Engineering due to non-accreditation of the engineering courses which has been ignored for long. The protest began on the main campus and quickly spread to the mini-campus in Gwagwalada where other students joined in, lamenting over poor learning conditions and infrastructure.

These protests continued the next day, with the students barricading the Lokoja-Abuja expressway. Security operatives had to be called in to take charge of the situation, and on the 21st of November 2012, the school was shutdown by a circular from the office of the University’s Registrar. Members of the Nigerian Army were then called in to evict the students out of the hostels, having them scampering away in different directions, with two cases of female students being beaten mercilessly by the soldiers.

University of Abuja turned 25 on January 1st, 2013, but it is sad to say that the deplorable state and the latest trouble beguiling the institution is hardly anything to roll out the drums to celebrate a silver jubilee. Burdened by the constant strikes, both internal and general, mal-administration, and inadequate monitoring, the institution has known little or no development in its 25-year existence.

Unfortunately, the students have been the ones to bear the brunt of such mis-governance. In an attempt to lessen this, the students of University of Abuja took to Social Media Network – Twitter to raise these long-unanswered questions.

The aim of these visibly aggrieved students was to tweet about the apparent aimlessness of the University, ask for precise dates of resumption and 2nd semester exams for the 2011/2012 academic year and generally, not to be taken for granted. Armed with the hash tag #UnibujaInPeril and constant mentions of Reno Omokri @renoomokri (Special Adviser to the President on New Media), Reuben Abati and Federal Ministry of Information, their goal was clear; to get their voices heard and to get the ear of the government.

“I have slept 30years worth of sleep from December till date, thanks to Unibuja…I don tire #UnibujaInPeril”

“1 word: FRUSTRATED. 1 slogan: ENOUGH IS ENOUGH. 1 Wish: TO SEE A BETTER UNIABUJA. Is that too much to ask? #UnibujaInPeril

“We fight for Admission, fight for seats, fight for grades, now we are fighting to continue fighting. #UnibujaInPeril

“We are tired of being left in the ‘Streets’, we want to be in our lecture rooms!!! #UnibujaInPeril”
These students have suffered for too long. They were driven out like refugees from their hostels by soldiers, not because they were being naughty, but because they were not given their bread and they asked for it.

This today is the plight of Students of the University of Abuja. We want to go back to school, we want to have a better education, we DO NOT want our futures consumed in this idle stay at home.

Let The Government Come To Our Rescue.