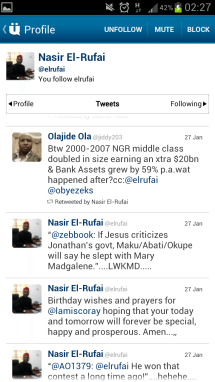 The above startling caption was what greeted me early this morning when I got on twitter as is my daily ritual now to check my ‘Timeline’ 1st thing in the mornings. As senile as I am to media antics and sensationalism, this had to make me jump from the comfort of my bed and take a second hard look. The first thing that came to my mind was since when did El-Rufa’i became an expert in biblical theology as to dabble into such deeper waters? Without holding brief for Malam El-Rufa’i, I instantly concluded that he couldn’t have said or written such a thing, thus I decided to read the whole report hoping I could catch some glimpse of mischief by the author by way of distortion of the truth. But the report to my amazement was consistent in its allegation all through; that indeed Malam has blasphemed and desecrated Christianity and the whole Christendom. It then occurred to me to check Malam’s tweets myself and get the whole gist from the source; and then I found this…

So essentially Malam El-Rufa’i was responding to a tweet by my good friend Bukola (popularly known as @zebbook on twitter) in which he found @zebbook’s tweet on Jesus hilarious as to use the popular acronym ‘LWKMD’; meaning ‘laff wan kill me die’. Naturally, I understand the reaction and anger this miscue generated, after all this is Nigeria where religious sentiments run wild faster than a Californian fire. Furthermore, this is Nasir El-Rufa’i alias ‘controversy on two feet’. Few public figures evoke such passions in people as he. This is one man whose beliefs led him to take on an army of Okada riders and a behemoth of illegal housing occupants when he was Minister of the FCT. Nasir has always been on the unpopular side ever since I can remember; never the type to shy away from criticism. So this particular incident must have been probably just another day at the office for Malam I guess.

Now I must emphasize the fact that I for one as a Muslim and respecter of both religions, do not find @zebbook’s tweet hilarious, neither do I find Malam’s subsequent retweet. Even though I understand the context from which Bukola was trying to paint his story, been an ardent student of sarcasm myself, it is nonetheless most regrettable, and in as much as the Freedom of expression dictates that Bukola acted well within the confines of legality, a certain degree of decorum is expected from us from time to time. The last thing this polarized society of ours needs are such sour jokes. But I believe in my friend Bukola, I trust his judgments and perhaps being of flesh and blood as he is, one is always prone to err; this is just one of those days.

Now to the media and its frantic pursuit of sensation, I must say this is one appalling escapade that leaves one disappointed in so many ways. The way the media was agog with this El-Rufa’i palaver, one would imagine he had formed his own religion and declared an all out war against the whole Abrahamic religions. We are already a tensed nation, with bad blood caused by religious intolerance cutting deep into our collective psyche that the last thing we could handle is a media-twisted campaign riddled with mischief and falsehood. And if truth be told, this frenzy isn’t much about Jesus and Christianity as it is about the man El-Rufa’i himself. For I am of the opinion that if some other person and not El-Rufa’i was the one credited with such blasphemy, it wouldn’t have made the rounds as to be accorded front news status. The whole thing for me was totally blown out of proportion. Being the fourth estate of the realm, the media is charged with informing the citizenry in the most credible and ethical manner. A strict code of conduct- devoid of distortions, lies, and unverified assertions is the barest minimum expected of it. Now when it fails in this basic service, then it seizes to be what it is. Our media outlets, both online and off need to stay true to themselves by reporting objective news devoid of bias.

Lastly, to the self-proclaimed twitter ‘activists’ who in every matter of religion seem to take rather agnostic and secular views; well Nigeria for the good and ill reasons remains by and large a religious nation. God remains perpetually at the center of affairs. Their incessant rant over religion is almost always certain to land on deaf ears. It must be noted that our quest for human rights and freedom should not become license for us to import cultures and values alien to us and our beliefs. Yes I agree that religion can become the opium of the masses; at least Karl Marx for all his extremism and heretical poise pretty much has a point here. And over the years in Nigeria, this concept of using religion to keep the masses subjugated has been all too predominant. Hate preaching, extremism, intolerance, and dogmatism have combined to plague our religious circles and by extension the entire Nigerian space. However still, this unfortunate phenomenon is not enough reason as to reduce religion entirely to the back-burner and chastise those who strive to uphold its tenets even in matters of the State. In the end though, we mustn’t as a nation lose sight of the burning issues bedeviling us. What birthed this whole religious debate were pertinent questions asked by the esteemed Madame Obi Ezekwesili regarding misappropriation of state funds by governments at the center.  Whether Muslim, Christian, Buddhist or even atheist, we are all consumed by infrastructural rot, economic hardship and generally poor living conditions. For our sake and that of our children yet unborn, we mustn’t shy away from our collective responsibility of calling the government to account and invariably aid it in its duty of safeguarding our well-being. So help us GOD.