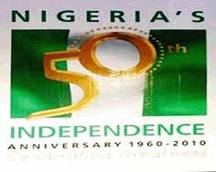 Nigeria can celebrate, but in celebrating it should realise it is not celebrating anything close to independence let alone 50 years of such. We are a nation of perpetual anomalies and aberrations, so then if it takes a week to celebrate our failed promises, if it takes billions of naira to celebrate an abnormal economic set-up, if the kidnapping of children is the essence of our nationhood then we can keep on with the celebrations.

Would the president be in a celebration mood if his children were among the 15 children that will live with the scar of their abduction for life even if they survive the ordeal? Will the governors be in celebration mood if their children had any stake in the rot of the educational system? The past three years has witnessed monumental scales of failure in the WAEC and NECO exams and the immediate future is not promising either because strikes remain a common face in the system.

Governor Fashola has done really well, but then say that to the traders who were sent out of Tejuosho market only to find out that their former business points were no longer within their reach. It has become an reserve of the super-rich. The market that offered many the opportunity to get good clothes without emptying their pockets is sure to be one of the most expensive when it reopens because those buying it will look to recoup their investment.

Tell residents of Lekki to celebrate Nigeria’s independence when they have had to battle their own government over what should ordinarily be a non-issue. These are a people burdened with all sorts of taxes from waste to signage, to the maze-like Lagos tax system and are yet expected to part with at least N400.00 per vehicle per day for a round trip. That’s no way to lead. Fashola has done really well by Nigeria’s standards but I need not tell you that those at the base of the Lagos economic pyramid – the market women who have to pay exorbitant fees just to do subsistence business, the motorists and commercial bike drivers who have to deal with several men of fanciful uniforms paying several sums of money from one point to another – will not buy that proposition. Of course the burden of such ‘taxes’ falls directly on the masses.

If that is exclusive to the common man, the incubus of armed robbers and past military men and their cronies daily haunt Nigerians rich or poor. Folks who should be languishing in prison are bold enough to say ‘vote for me’, one of them is so desperate he says ‘for just one term’. I used to know armed men as folks who operated at night, but that is the old way. They now operate at anytime. Kidnapping looked to be a fight for regional justice but it has become the most lucrative form of business besides official sleaze. I can’t just get the 15 kidnapped children off my mind. CNN milked the story and that alone should have been enough to make us bow our heads like a soon to be 50 years old man who has just discovered his own old jobless elderly children have kidnapped his little ones. I almost slumped as I watched the news relayed on CNN in our so called independence week. What a shame!

Before October 1st 1960 Nigeria was burdened by colonialism, today we are a nation in dependence. We rely on the government to provide us power, the government determines the prices of goods, they favour a few wanna-be capitalists at the expense of the general economy. How do you explain a situation where a few are allowed to obtain tens of billions of naira of loans from the banks, then granted monopolies on basic necessities like sugar and diesel then told they could pay a part of their loans while the remaining chunks are written off. That is not just but then who gets justice from a nation whose law makers got their by unjust means. Unjust men can only make unjust laws, unjust laws are no laws. They may bring about relative peace but only a peace that has had justice sacrificed at its altar.

Ours is a past embroiled in lies, shame and corruption. We have failed and are still failing the African continent. The present crop of presidential aspirants even douses the little hope one has for the future. None has said anything about a time bound, SMART workable vision. They have all been offering the same rhetoric. We are burdened with rulers when even some other African countries now have leaders.

Oyo state remains shackled by the near absence of governance, Aba in Abia state that by now should be catering for a global demand for goods is a no go area even for its indigenes. Jos is a serial time bomb. Each tick sends men, women and children to their early graves. Even Ogun that seemed to be making a head way a few years ago has become a draconian, lawless state where anything negatively imaginable is possible.

So much for 50 years of independence when Gabon – a country where Nigerians make up just about 10% of its population – is ranked above us on the FIFA ladder. We do not have any world champion at any sport whatsoever. 150 million people plus the Diaspora and not a single world champion! If our nation had a body, soul, heart and mind, she will be soaked in her own tears by now for failing to deliver on its promises.

There is no use crying over spilled milk – or spilled anything whatsoever- though we can start remaking our beloved country. We need transformation at every facet of our national life. Commuters still burn valuable man hours on our roads and they remain in danger of tanker drivers and other road menaces. At times it looks as though we are not governed by laws. I love being a Nigerian but like my Arsenal devotion, it hurts being a one

Dreams are shattered on a daily basis. We complain about cyber criminals. Forget the whole holier than thou attitude, an idle mind involves its body on evil things. Nigerian youths are said to be unemployable and the Nigerian government seems bent on letting them remain like that. EFCC barked for a few years but it is now taking a rest after realising you don’t cure a disease whose cause you are not ready to nip. We should not be fighting criminals; we should be engaging our people. The economy should be made free. The ease of doing business should not in our case be a burden. People are over taxed yet infrastructures are under-provided. Every thing seems to be in place yet nothing really works. Companies have folded and many are still folding. Nigerians are indeed suffering – I know not if they are smiling but I saw no smiling face when I tried to see how many people in a group of 50 would smile into an event venue. That is no basis you will say but then are boys smiling?

Over time I have come to realise that Nigerians may never be cured of their impulsion to always trust new rulers. We clutch at any straw that looks new enough. Any new face that seemingly looks like the birth of a new order is seen as the big deal. I hope this renewed hope will be herald a real independence for our nation, economic liberty for our people and a safer country for our children.

Nigeria has no business being in this state. Hundreds of trillions of naira of oil money has been wasted over the past 50 years, we can do better. We sure can do better than we are doing now. It is easy to please Nigerians. They really have lost the ability to expect much and this I believe is enough to inspire anyone interested in leading to want to surpass this not-so-high expectations. It is okay to mark October 1st 2010 but trust me fellow compatriots, we have nothing to celebrate. Nothing! Nothing besides a future that always promises to be better. Happy birthday Nigeria as I look forward to celebrating your 60th birthday in style.

Oh God of creation, direct our noble cause
Guide our leaders right
Help our youth the truth to know
In love and honesty to grow
And living just and true
Great lofty heights attain
To build a nation where peace and justice
shall reign