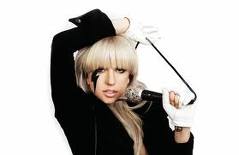 Born to Joseph and Cynthia Germanotta as Stefani Joanne Angelina Germanotta in March of 1986, Lady GaGa has since birth a new order in mainstream entertainment. She wasn’t born with the right though. She came through the ranks and she is unarguably the biggest act at the moment. As Stefani Germanotta, she attended the Convent of the Sacred Heart school in New York. As a high school student, she featured in a host of plays and musicals. She also had stints writing songs and performing at clubs in Manhattan. Miss Germanota also attended the Tisch School of the Arts at New York University. This academic and educational background prepared the would-be Lady GaGa for what was to come.

That she is the most sought after artiste not just by fans but even the cream of the crop amongst her colleagues wants to have her just for a studio session. If Britney Spears confesses to wanting to do something with you, then you know you isn’t no joke. This is no mean feat for someone who started off writing pop tracks for the likes of the aforementioned Britney Spears, New Kids on the Block and the Pussycat Dolls. Her underground days also include sessions with producer Rob Fusari –who she met through her times in clubs in the Lower East Side of Manhattan – in 2006. Fusari has been credited with creating for her the stage name Lady GaGa – not without inspiration from Queen’s classic hit ’’Radio Gaga’’. Lady GaGa hooked up with DJ Lady Starlight and the duo made the audience pay a closer attention to them with projects like Lady GaGa and the Starlight Revue.

Lady GaGa’s claim to fame though is the Single ‘‘Just Dance’’, which was released in 2008. She has since become the most followed on twitter, the most sought after by fans on Facebook and the most talked about amongst her peers. She has well over 1 billion video views online, has crossed the 15 million barrier in terms of fans on Facebook and has some 6 million followers on twitter. These figures are even more significant when you realize the fact that the figures of fellow artistes pale in comparison.

She sets her own trends not just with her music but even as a fashionista she’s been known to create never-before-seen styles of her own. 5O Cent recently in trying to emphasize Lady GaGa’s novelty as a trend setter, talked about the fact that Jay Z’s look is not far from mimicking Frank Sinatra, while he also believes Wayne Carter isn’t any different as he has also been able to successfully copy…not Lady GaGa, Fifty says. He agrees Lady GaGa is the only musician in the spotlight setting her own trends. He also in the same breath talked about possibilities of working with her, something for which he wouldn’t mind waiting considering a roll call that includes Ne.yo, Lindsay Lohan, Susan Boyle, Snoop Dogg and any artiste imaginable.

Lady Gaga chose a different path from many of her counterparts in the Lower East Side club scene as she turned to Pop for inspiration rather than pop music. Her influences include Cyndi Lauper from her childhood, 70’s variety shows, disco, of course Madonna and stints with Cocaine, which she still admits to take once a while but states categorically it is not for inspiration.

Lady GaGa’s career as a solo artiste was greatly influenced by Akon. She was briefly signed to a contract by Def Jam, which yielded no recordings. In 2007 however, she was signed by Interscope as a songwriter and started working with Akon. Akon had her do initial reference vocals for recordings and having seen her talents hands-on, he began promoting her as an artiste. Working with her creative House of GaGa team, Lady GaGa recorded her first album The Fame. Interscope dropped the first single ‘‘Just Dance’’ in April 2008 and sent Lady Gaga on tour with the New Kids on the Block reunion tour. Her debut album The Fame found a place in the top 20 of the album chart…andthe rest is being written as she keeps blazing trails and writing history today.

She consistently romances controversy as she does fame. Like most successful American acts, she has been described as The Anti-Christ, a Satanist and everything between those. While those seem far-fetched and ridiculous, expect the rumours and the controversies to even set a trend of their own – what about her being the mother of the devil and some other ‘ingeniously’ created rumours?

In terms of her fashion style, she has had comparisons with Kelis and Rihanna especially with her dress style, something for which Kelis spoke about and ascribed to their similar ages and to the possibility of sharing stylists over time. While ‘‘swagger jacking’’, an act of ‘stealing’ someone else’s style is rife in the music industry – and indeed any industry- Lady GaGa has had her style hailed as novel, original and while she has received knocks for her daring style and persona, there’s no saying when the GaGa effect, the obviously obsessive love of Lady GaGa the person, the artiste, the fashionista and the phenomenon will end. For now, it looks like the bug has just caught on and that you finished this article is a pointer to the fact that Lady GaGa’s bug may just have bitten into your skin.