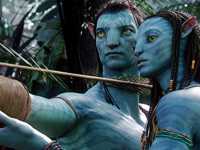 This is proof that there is more that can be done by our Nollywood film makers. The likes of Tunde Kelani, Kunle Afolayan, Tade Ogidan are already making the most(and the money) of the Movie industry in Nigeria. Enough of movies that insult our intelligence with predictability and zero-suspense…you know what I mean! Things can be done properly and big money can be made at the same time…Here is proof

Yes, it’s got the biggest worldwide gross of all time.
But it’s still no “Gone With The Wind.”

James Cameron broke his own record Tuesday. With a $1.86 billion haul, “Avatar” beat “Titanic” to become the highest grossing movie of all time at the worldwide box office.

It’s a remarkable achievement. But before every Hollywood studio exec decides that all future movies must be in 3-D and feature blue aliens, it’s worth getting a little perspective on the film.

In Pictures: Is Avatar Really King Of The Box Office? >>
“Avatar” has the advantage of showing in 3-D (which usually commands an average $3 extra per ticket) and coming out at a time when even 2-D movie tickets are more expensive than ever. According to the National Association of Theater Owners, the average ticket price in 2008 was $7.18, up 56% from prices in 1997 when “Titanic” was in theaters.

A look at domestic grosses adjusted for inflation shows a more realistic view of “Avatar”‘s performance.

In the U.S., “Avatar” has grossed $555 million making it the second highest grossing domestic (as opposed to worldwide) film of all time. Titanic is temporarily still in the lead here with $600.8 million.

But adjusting for ticket price for inflation, Avatar ranks as the 26th highest grossing film in the U.S., according to Box Office Mojo. Number one? “Gone With The Wind” with $1.5 billion adjusted gross in the U.S. “Star Wars” ranks second with $1.3 billion.

Cameron’s “Titanic” ranks sixth (just behind “The Ten Commandments”) with an adjusted $943 million take in the U.S.

Of course movie now can sometimes double their box office with DVD and television sales. Here we’re only looking at box office.

With no film on the near horizon poised to challenge “Avatar”‘s dominance, the film is sure to continue to mint money. But it’s got a way’s to go to catch up with a classic like “Gone With The Wind.”